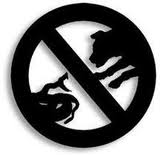 If you live in San Diego you live with snakes!   If you run trails it is not if but when you will come across a rattler...and if you run with a dog off leash you really should get your dog trained....seeing we run frequently in the trails with Mako off leash we knew we had to get him trained.

Ironically just yesterday while hiking up Black Mountain with Riley, Mako stuck his nose in a bush and jumped back and we immediately heard the rattle... the snake was heading down the hill into the bushes and Mako was definitely cautious- did not seem interested in hunting.

Nevertheless we had scheduled aversion training this AM.  We arrived at a beautiful spot on Poway Road and there were lots of dogs "waiting"  They strap on a shock collar, the handler takes the dog (not Mako is shaking and almost whining already)  and they head into the field.  We followed to the other trainer and saw the rather large snake on the ground.  No fangs (so they say)  He walks Mako near the snake, the snake rattles and Mako is backing off and not

interested, hiding behind his legs.  Seems he knows on his own....but they want to be sure.  So the guy picks up the snake with his tongs and the snake is angry...they push it toward Mako and then they shock him....poor dogs leaps off the ground and is running away....we comfort him and within minutes he is fine.

Headed to Denver for an overnight and the Minneapolis for the week of work.