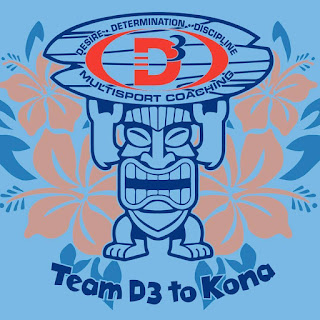 Kona is my happy place the 9 days leading up to the Ironman World Championship!  IMWC is my favorite swim, the bike and I have an inconsistent relationship and the run, well let's just say we are at odds.

This was my 6th Kona and every time I well up with tears of gratitude and excitement treading water Kailua Bay and again at the magical finish line.

Swim: 58:05.  Best swim in Kona.  I felt great the entire swim and was swimming strong and comfortably, never out of breath and just under, pushing it too hard.   I worked for this.  Post IMBoulder we did a 3 week swim block of 25K a week with a few 7-8k swims and this gave my swim a bump that carried me through to Kona.  I consistently swim 15k a week with a few 18K weeks.  2 solid masters sessions with 5k where I am all in and often would finish up a bit smashed with a lolling head in the showers.  3rd swim a long aerobic swim with lots of pulling and the 4th varied from a recovery swim to a shorter masters session. 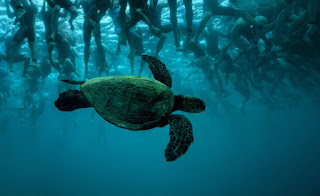 Bike: 5:49:35  I have ridden faster and slower here, but looking at power which is what is telling, I was within 5 watts of my good years. But what was different this year was the last 30 miles I was feeling great.  The grind from Waikaloa to the turn to town I was in my aero  bars, hitting my power and feeling solid.  Most years I am massively uncomfortable, fighting the head wind and miserable.   Few changes here was a core focus that last month which was really for the UPR and I think that really helped my lower back. Every day 10-12 min, nothing crazy but made a difference AND my last long mid week rides were post long swim.  There is something about the neck and lower back muscles swim to bike.  We do a lot of bike to run bricks but I think long swim to bike are beneficial as well. 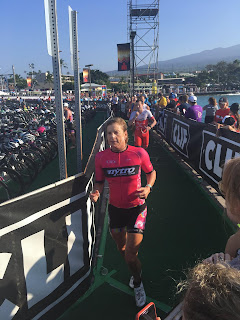 Fueling:  Plan was 2x 750 calorie bottles with carbo pro + caffeine but when I reached for my bottle turning onto the Queen K it was gone. So either I hit a bump and lost it without knowing or someone grabbed it - hard to say.  Minor panic and had to readjust. 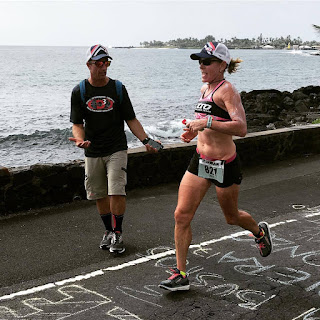 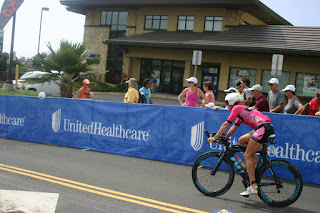 Run:  4:34:46  - this pains me to type. OTB I was wobbly on the pier but who isn't.  Running out of T1 I was feeling relaxed and great.  First few miles breezed by with ease, holding back the pace  I took in a water at each aid station + shot block but SHOULD have been drinking 4-5 cups and started the sodium immediately. OR had a full bottle with the goal of getting it all in the first hour.   Mile 4 I started seeing black spots and feeling dizzy and my legs locked up.  I increased fluids and sodium was running ok until mile 7-8 and then  coming up Pilani I had serious waves of dizziness and black spots and had to walk. I was terrified my race was coming to an end.  I was walking and jogging to keep moving.  At the Queen K was more walking. Between MIke and John telling me more fluids, coke, salt I was tuning them out and giving up, it was just horrible.  Mike told me run 100 steps and walk 10, I ran 100 and walked 25 and slowly increased the running to 200 and managed this through the next few aid stations but was so low and was passed by enough women with 8's that my dreams of a podium finish were slipping away, it became about finishing the race.  Around mile 13 I changed it up and took 1 cup of everything, water, coke, water, Gatorade, red bull, water and the volunteer dumped 1/2 gallon ICE water on my head and the fog began to clear and I was moving , slowly but running.  So every aid station I did it all, hat in ice water and a liteny of fluids.  It was just so damn hot,  the lovely cloud cover we had in years past was non existent- it was full sun blazing sun that was relentless.   From here it was one mile at a time.  Entering the Energy Lab I was feeling better and running back around the 10:00 mile pace.   It was not pretty and it was painful but I was moving and just kept going,  I was chasing the sun and decided I'd rather drop on the road versus walking any more.  The slog back up the Queen K was a new place of pain  and suffering but seeing PalinI I started to cry, I am going to finish.  Ruining down Pilani was so painful I cannot really explain it and then it gets a bit fuzzy.  Years past, not matter how hard that final run to the finish line is so amazing, slapping hands with tears of joy but I don't recall much other than the girl who passed me in the chute, yes my AG and beat me my 6 seconds.

I remember finishing and then it goes dark.  Next memory is the med tent.  Lost 9lbs and when asked could not give a clear answer about my location.  When the Dr asked me to follow his finger with my eyes I apparently told him that if he held it still I could follow it.  That along with telling him I was at a circus and I earned and IV.  10 min later it was all coming back to me.

So with that I have conflicted feelings.... elated to have have been her and finished but so disappointed to not have held my run together! 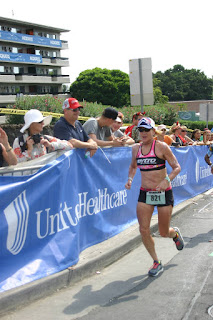 John and Mike were invaluable out there, thank you!!  Hillary, your words got through to me as well.

So we close another Kona.  Here is what I know

1-I will be back but not in 2018
2- I  have to figure out how to manage losing 84L of fluid/hour and 3100mg of sodium before I return.  The heat and humidity is what is killing me here.
3- My run needs to be at at different level
4- I  need to fix my imbalances that are limiting me on the run 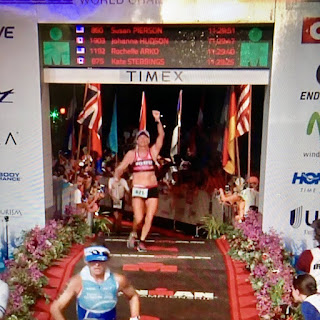 So Mike and I are working on a plan that does not include IM in 18, expect maybe very late in the year -  it's a long list to fix before I come back to Kona!

Even with the pain and suffering this is an amazing place!  hats off to those who can executed a sold race in Kona. 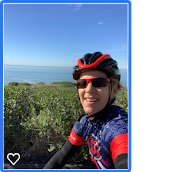