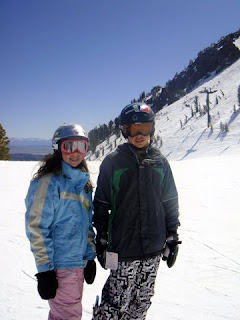 So after I finished my race, we came home, I showered, ate and ate.....and hit the road with Riley and headed back to Oceanside for the awards ceremony in hopes that the 1st place winner would NOT take the Kona slot....but well she did. So I grabbed the nice award and we hit the road. Oh, we stopped at one of those awesome yogurt places, where you serve yourself. Riley was dying when she saw the size of my yogurt....still hungry after burning all those calories for 5 hours.

And we headed to Bakersfield....why Bakersfield? JD's soccer team was playing in State Cup and he went up the night before with another soccer family. 4 hours later....2 Grande Latte's and we arrived in the ever so lovely city of Bakersfield and the charming Courtyard Hotel. So seriously, the room had a king bed and fold out couch and it was so small that with the couch folded out, we had to move the desk chair out of the way and put all our luggage on the desk. We collapsed into bed and I was out and as usual post race night I was wide awake at 2am.....except I could not read or go on the computer as did not want to wake up the kids. Thank goodness for the iPhone...I looked up everyone I knew who raced, look at splits, agonized over my race, read the newspaper online on a small phone and created a massive headache. Around 5 I passed out, only to get up at 6:15 for an 8am game.

Off we go and the boys lose 1-0. Argh!!! Now we have 5 hours to kill before game 2 and there is NOTHING to do in Bakersfield. JD is in bed asleep, not feeling well and Riley and I are shopping....don't get too excited as all we can find is Costco and Longs Drug. WooHoo.

We return for game 2 and I kid you not, the winds are 30 mph, chairs are blowing away. The field has a big dirt spot which becomes a dust bowl- our faces are gritty, my lips are caked in dirt since I have on chap stick. Can I tell you it was horrible and they lost....1-0!

On we go to Mammoth!! Hooray... I am now operating on no sleep, post race and we have a 5 our drive. This time we go to Vons and I buy 3 Starbucks double shot's. Down the caffeine and I actually feel pretty good, only had to drink one of them. Listening to the audio version of the book Roots! Surely a story that is riveting and kept my attention and I was wide awake. I remember the mini series as a kid and being horrified. Hearing the book it truly depicts the evils of slavery but also gives you a great reminder of what strength family can be even under such horrid conditions. The book goes into great detail abut Kunte Kinte's life in Gambia, prior to his capture and his deep Muslim religious beliefs. This book is rich in heritage. It is rich in dialect. It is rich in every human emotion possible, and dreams.

10pm we arr rive at the Westin!! Hooray a Heavenly Bed and a nice hotel room. JD is very sick now, coughing and sneezing. Med him up and he out and I totally crash. We all sleep 10 hours and are not in a rush to hit the slopes in the morning....a total abnormality for me. I am generally pacing the floors, rushing everyone to ensure we are on the slopes when the lifts open.

Maybe post race skiing is good for my family. We have a nice breakfast- full kitchen in the rooms, love that! Especially since now 48 hours post race I cannot stop eating... cereal, banana, toast, coffee and more coffee. And we are out the door on the Gondola by 10. Spring skiing big time, but great fun. Riley and I hung together and JD hooked up with a buddy on the Mountain. I was happy for a leisurely day. We met up with Pat and E and did some great runs and pushed Riley a bit.....headed home around 3:30 and jumped in the hot tub and it was grand. I was thankful that E was complaining about her legs as well. She too commented that post race skiing boded well with her family. What does that say about us, we need to race and suffer for 5 hours to be calm and civil?

The real fun started Tuesday afternoon because it started snowing! Yeah...we came of the slopes very excited in anticipation of a great day on Wed. Enjoyed a nice chardonnay and the hot tub in the snow and it was wonderful. (Kids had Root Beer for the record) Something about sitting in water when it is snowing! Watched a hilarious movie- Meet Dave with Eddie Murphy. We were belly laughing it was so funny.

We were up early with anticipation on Wed... all of us ran to the window and threw open the blinds and hooray!!! it was still snowing and it was covered in white! In the lift line at 8:30 waiting for the lifts to open and up we went. The downside was 30+mph winds but there was powder. I had to take my own route down and agreed to meet the kids at the bottom. I took off and found first tracks all the way down up to my knees in some spots. After the run JD was freezing and needed his face cloth so I sent him on his way as I had to get in another blissful run. Powder brings out a selfish side in most of us....the calmness of post race was gone. Nice while it lasted, I was eager to get as much powder as I could before it was gone. Kind of like drug, give me more, more, more...... RM checked in for snowboard school at 9 and was moved up to the Advanced Group- go girl!

JD and spend the morning off lift 22 on the steep black and double black runs in deep powder. It was a near white out and when it cleared, standing at the top, JD looks down and says he cannot go down that run. I am perplexed, why? I tell him he has done it twice and he is shocked he is going down such steep slopes. Something about following me in a white out....It was great! He was on some of the toughest terrain on the mountain and doing quite well. We ventured into the trees and the snow was even better. The wind just made is unbearable and it was so cold, 10 degrees. We took a long lunch in the hotel and headed back out as it looked to be a bit less windy, wrong. But we made the most of the rest of the day enjoying the terrific snow and seeking our fresh tracks where we could.

Powder takes toll on the legs...JD headed down around 3 and I went to pick up RM. Down she comes on the instructors tail and she is covered in snow with a huge smile on her face. She was riding blacks. linking turns no problem, learned how to effectively ride in powder and to navigate the trees. I was freezing and tired and she was dying to go so up we went and squeezed in a few more... she led the way and took the black runs and did not flinch about the bumps and powder. She will be keeping up with her brother next year no problem!

Great few days, but had to come to an end...Happy Hour at the Westin with another family we knew and it was great. Kids were off in a snowball fight within minutes and the adults continued to let our weary legs recover.