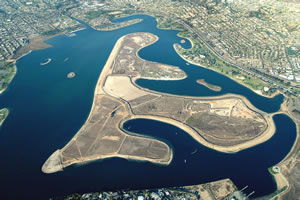 This my friends is Fiesta Island....4mile loop in Mission Bay that is pancake flat-  San Diego is NOT flat...as my friend from Denver said- there is more flat in Denver than San Diego.  But that is okay by me as I don't like flat (when it comes to riding) I seek out hills, climbs and the more the better.  I like hilly races....IM St George, IM CdA and upcoming IM Lake Placid- FL or AZ,  not my choice.   Racing hilly means I get to train hilly!
But....even on a hilly course it is 5+ hours of mostly aero riding and that takes a toll on the body !  So...this weekend I was told to ride aero.... we rolled out and rode 90 minutes of up and down roads keeping aero as much as possible and arrived at Fiesta Island for some real fun!  5x15 minutes....12 min IM Watts- 3 min 70.3 Watts- get aero, stay aero, be consistent and have fun!  I even rode in my tri-shorts for the full IM "ouch" effect.
Iggy met us on Fiesta with water- seriously he is the sherpa extraordinaire!  Off we went....back side was windy as usual but it was great.  It was sick kind of a workout  on really tired legs, but Maureen kept me company and we hammered them out-  nailed each one spot on and gave a bonus at the end... the ride home I was expecting to feel smashed but I still had some spring in my legs and was feeling optimistic about Sunday!

Sunday was my longest run to date...since Kona and since the broken leg.  Coach said flat run and well I don't live near flat and I just did not want to drive to run and I wanted run with Mako.  And flat means pavement and that is a lot on his littel feet- so we hit the trails and clicked off the miles-  I was quite surprised how good my legs felt, my  HR was high, but the run was great.... I had a few intervals to do and we found flat for those - but I bailed after the first one as I could not hit the designated pace.  Come to find out that I was looking average pace on my Garmin vs actual pace-  oh well.....we retreated back to the trails and enjoyed chasing rabbits and the sceneary and the hills.   I was fighting a mental battle - worried I could not hit the pace I needed to - but tried to focus on the fact this was my biggest running volume week in???? possibly ever....that with a solid long ride and a good mid week Great Western Loop it is all good!   When I downloaded the run - I realized the pace was not as bad as I feared....its all good!