WooHoo we arrived in Steamboat!  3 days in Boulder were awesome and we hit the road again.   Jamie (my 7 year old niece) and I in the car.   We loaded up the iTunes and played name that tune with iPod.  She soon learned that Lady Gaga was Riley's music and ACDC was JD's music.   3 1/2 hours later, a bag of Oreo's when she got bored and we rolled into stunning Steamboat.

Our house is quite idyllic.  We are mid mountain and the house is perfect for the 17 of us.   Settled in and it was outstanding to all be together.

First night was not a late night as we had the Tour de Steamboat the next morning.  So 7 days after the Death Ride, we rolled out at 6:30am for 110 mile ride. 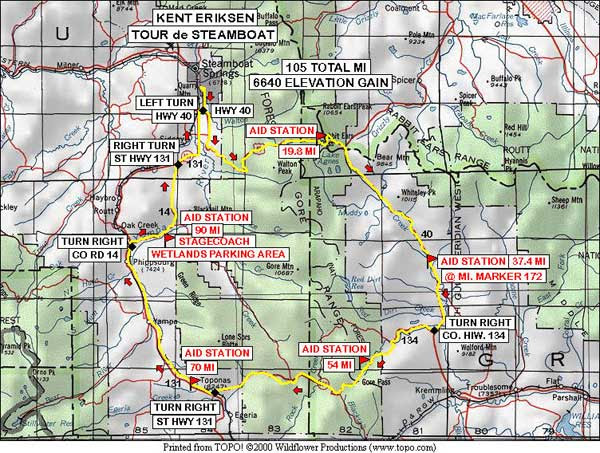 Start was chilly and soon it warmed up....boy did it warm up.  95 degrees in the mountains.  Come on!  First pass was Rabbit Ears Pass 9426elevation.  16 mile climb and we summited.   Started with my bro-in-law who is a Cat 4 Roadie and he dropped me fast on the climb.  So I settled in for a good IM paced ride.   At the summit of Rabbit Ears Pass I met a local who wanted to work together and I was game for that.

Awesome descent and some rolling hills!  Next up Gore Pass 9527ft elevation and the climb was 6 miles and very reasonable.  Another mechanical for me!  Ah- I am so sorry for neglection Ruby!!!  Front derailleur issue but thanks to Tom and his mobile tool kit - we were only stopped for 20 minutes.  At the top of Gore, I met up with John (my bro in law) and we began the last 40 miles which was mostly a wicked fun descent with a few rollers.

The worst part of the ride was the last 3 miles back to our place....Serious grade and tough climb back to the house.  111 miles and 8900 ft of elevation and we were back home!  I paced the ride well and felt great.  Not decimated and the altitude was not too bad. Maybe, just maybe I am acclimating to living at 6000ft.