My goal for Wildflower was to have fun and enjoy the day!   Check.....I did both and manged to win my age group along the way.   After so much training and race prep and stress for Oceanside I headed up to WF with a totally different mind set.


We drove up Friday, day before the race, normally would totally stress me out, but was not worried.  We rolled in around 2 and I picked up my packet around 4 and we set up camp. Thanks to Jodi and Ken our tent was pitched in a premier spot near their mega trailer and Darcy. We were amongst the Tri Club of SD mayhem but that was okay.   Dinner was on our own and we had a cold Quinoa pasta salad with veggies and GF PB cookies.   Even had a few beers.   I was tired, the campfire was blazing and the tri club was partying.  I took a sleeping pill, popped in ear plugs and was asleep by 9pm!  Only woke up twice and slept amazingly well on the air mattress- definitely a must have for all future camping excursions. 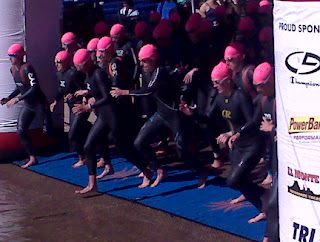 Up at 5:45 with the light and the announcer saying "good morning athletes" over the loudspeaker. Solid night sleep and 5:45 is sleeping in vs 3:30 wake up  time for O'side.  Coffee was brewing and I made GF pancakes and we were in good shape.  Light wind and it was cold...although I knew that would not last long so I tried not to complain, too much.

With the pros going off at 8 and W40-49 at 9:25 there was no rush to get to transition.   Around 7:45 Riikka, Jodi and rolled down there- very casually and set up our gear.  Jodi and went for a short run, scouted out some empty porta potties and watched the pros go odd.  Hung out with Liz and Marion for a bit and then strarted getting ready. 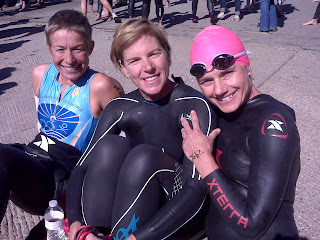 My plan for the swim was to swim hard- all out and see what I could do. It was a land start so I up front ready to go- off we went and 3 steps and I dove and started sprinting. I fully expected to be alone but no there was another pink cap on my right and she was going fast. I did my best to drop her and by the first buoy realized she was pulling ahead of me so I did the next best thing and tucked in behind her.  I was swimming hard to stay in her draft and once I figured out she was a good spotter I focused on staying behind her.  We rounded the buoys at the turn around I was not sure I could keep up the pace but she seemed to slow a tad.  And we have major chops and waves hitting us... Around the 2nd buoy I started feeling guilty sitting on her feet so I sprinted and as soon as she saw he she picked it up and we swam side by side all out for a bit, I was trying to get in front and then she paused to sight and I did but she went right around me and pulled ahead.  Okay....I tried to pull her back but she was not interested.  So I sway alongside and then tucked back in and hung on as she hammered in.  26:48- PR for me by over 1 minute!   And my arms are feeling it today.

T1- my bike was racked in the worst spot ever....all the way at the opposite end of bike out and bike in. Usually bike out and bike in are in different spots, so no matter where you are racked you have to travel the same distance with your bike either in or out.  But not here...so I was flying through T1 and my helmet buckle was stuck inside my helmet and I was fumbling to get it on, took me a  while to realize what what happening. Pulled off my helmet, glass fall off - lenses down of course on the pavement and I nearly tear my ear of getting it back on.   Finally I am off and can see the girl I came out of the water with mounting her bike and riding off...good 30-45 seconds ahead of me.  At this point, I am thinking she is in my AG.

Goal for the bike was to ride, have fun and not worry about power.   Took me while to settle in and we were climbing in no time.   I rode like I train and was not hammering and was waiting to feel better.  When my stomach settled I reached for my nutrition and took a swig and promptly spit it out-  I had mixed it in San Diego Friday AM and put it on the cooler - along the way the cooler was knocked open and when I pulled it out Friday night it was hot.  I did not worry too much but the taste worried me so I tossed it.  Oh boy...nutrition will be fun.  It worked out okay- I had 1/2 power bar and 5 gels- so got my 600k and even drank some Gatorade without stomach upset.  The issue was i want for over an hour without any calories as all the aid stations did not have gels....I was not stressing, okay maybe a bit, but just coped.

The ride was fun....but very soon I realized how windy it was.  I was bummed, O'side was windy and now WF was wickedly windy- I did not want to get depressed, after all everyone in my AG had the same conditions.  The course is beautiful and challenging for sure, but with all the GWLaero bar has jimmied out and was about 2 inches longer than the right one and had swiveled upside down,  Oops....  I was able to shove it back in but could not tighten it while riding and thus had to hold it in with all my might- possibly the sorest part of my body is my left forearm from holding on so tight.  It definitely affected my descending as I had to hold the bar in and manage the bike.... anyway stressful but could have been a lot worse.  I was a bit of  a sissy on the descents with the crosswinds - my wheels were a bit deep and I was getting blown about and after I say the 4th ambulance and the Life Flight Helicopter I decided the minute or two I may have sacrificed were well worth finishing the race on my bike.

So mile 40 is the infamous "nasty grade" I was prepared for Highland Valley Road and yes it was steep - it is a 4+ mile climb and nearly 1000 feet -not nearly what I feared and I was feeling good so just kept riding up the hill- here is where the 28 was awesome!  After nasty grade I was beginning to think about the run... I was feeling good, did not ride too hard  and suddenly it was T2.

Long run back in and decent transition.  Almost immediately you hit some stairs and within a few 100 yards you are climbing up and out of the lake area.  This is when I realized this would be a hilly run and took it very conservatively.   Here is when I knew this was a B race...I was not willing to go hard now and hang on.  So I had a comfortable pace and figured if anyone came up on me, game on, I will pick it up.  After mile 1 we are off the roads on the dirt....up  and up and up.... hot and dusty but my HR was low and I was feeling good- after looking at my Garmin post race, well I should have been feeling good- I was running slow.   Any who.....I was enjoying the day and running along, passing a lot of people who were suffering already.  A few times I forgot I was racing and had to kick it up a bit....there was a lot of climbing, did I say how hilly it was. In any case at mile 6 I decided it was time to get serious and I picked it up and raised my HR 5-8 bpm for the next few miles and was thinking I really am feeling good, should I take it up a notch?  I ultimately decided to stay steady until mile 10! Okay so mile 10 is so cruel...you run down hill for 1 mile turn around and slog back up-  so on the downhill some 30 something K-Swiss athlete blows by me, I mean blows by me- and woke me up.  I picked up my downhill running and on the uphill could see her up ahead and I made it my goal to catch and pass her with the same speed she blew by me...mind you I am going up hill- so maybe the overtake was not so speedy but I caught her attention and she picked it up, so did I and then it got hard. As we crested the hill she says thanks for the motivation and takes off.....uh excuse me??  So I pick it up after her and as we approach the final small hill I cruise right past her and then the final mile, steep downhill and I knew she had me here- her downhill running skills far surpassed mine so I did my best to stay on my feet and run downhill like a kid with whirly bird arms.  At the bottom I saw 3 boys and ran hard past them all for the finish!

I was pretty sure the girl I swam with was my AG and since I never saw her again I was fairly sure I was 2nd.  A tad bummed....but was complacent with that.  Meanwhile I tell everyone I was 2nd so they then calculate their places based on that.   I hung at the finish for a while to watch Marion, Polly, Molly, Mimi and a few others come in and we chilled for a bit.  Finally got my gear and turned on my phone to the many texts and messages..."way to go 1st place"  Oops....guess the other girl was younger than me :)