You know it is a good vacation when.....

All blog posting cease.....after the big hike the week just rolled along! 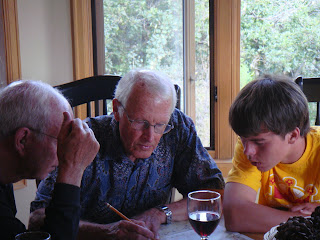 Making plans for a bid day of fishing! 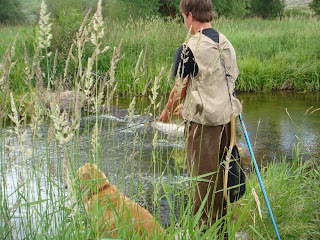 JD fishing with a random Dog - sure makes a good picture
Tuesday- JD and my Dad headed out for a day of Fly Fishing at the "private" fishing club.  Sort of like a Country Club but well you fish - not sure if there is a bar or not but seems like a lot of standing and waiting.  Apparently JD had a few good nibbles of a nice trout- but he lacked the skills to set the hook.  Much different than landing a catfish or a lake trout. He came home tired, eaten by mosquitoes and still with the zeal to fish and fish some more.

While JD was fishing the families split up went adventuring. Riley headed off with the Hancock's for a short hike to a waterfall for some fun!

Uncle Scott, Taz, Jax and Riley
The Hancock- DeRose family was out riding bikes and eventually Riley joined them for lunch and adventure.  Me...I had a few hours of work and then did a very painful run and went for a swim.  By the time I was done, everyone was gathering again and it was time for another big dinner. Fun to gather with all 17 for dinner each night- chaotic yes, fun absolutely!! 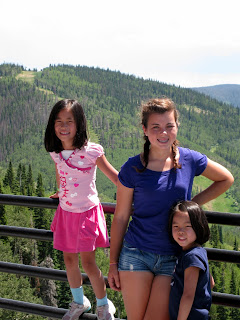 Riley, Jamie and Willa at the top of the mountain 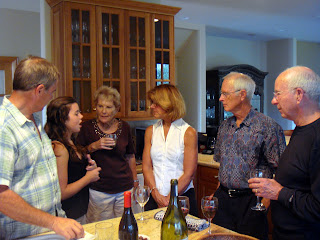 Riley telling the group about her upcoming 3 week sailing adventure 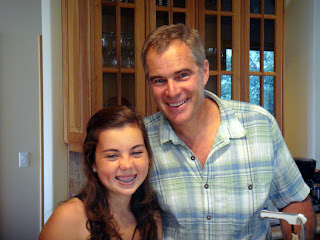 Wed was the big backpacking trip....Scott, Taz (5), Jax (3), Kathleen and John, Jamie (7), Willa (5) and JD and Riley.  My take on the trip.....not interested!  A huge amount of hassle, 2 mile walk that is sure to take a few hours, another night of not sleeping while camping, a great opportunity for JD and Riley to bond with their cousins and Uncles and Aunt without me.   Oh and we only have 2 backpacks and a 2 man tent.  So really no equipment for me.  Someone did point out I could rent a pack and a tent...but well, no.  And the whole saving money concept....right frugal Julie.   If my kids were small and needed supervision I would have been there but they are not small and they were both carrying extra weight to take some of the load off Scott.  After a lot of work and prep they all left around 10am....and off they went.
I was left behind, sad and lonely!  Okay not really, I was on my bike soon there after and tackled Rabbit Ears Pass again!  5000 ft climb and the elevation seemed a bit more tolerable. Even the climb back to the house was okay.  I had more work to do....even a conference call!  And then, okay confession time, I booked a 90 minute massage.  It was heavenly!   After that I did decide to drive up to where they were camping...,my plan was to drive to base camp and run in the 2 miles, say hello and then run out and be back in time for the our adult dinner at a local restaurant.   Good idea!  NOT....the road to base camp once you turn off the highway was 4 miles and it was narrow, gutted, filled with puddles, cliffs on some side and I was going about 8 miles an hour.  Suddenly it occurred to me if anything happened I was out here, no one knew where I was, I could not turn the car around.....crazy.  As soon as I could turn around I did and said forget it!  Meanwhile my sister-in-law (who did not go either) had the same idea and had turned around about 30 minutes before me because the truck she was driving was fishtailing all over and she did wan to plunge to her death!
As it turns out they had a marvelous time!! So glad for all of them and we had a mediocre dinner in a wonderful setting along the Yampa River. 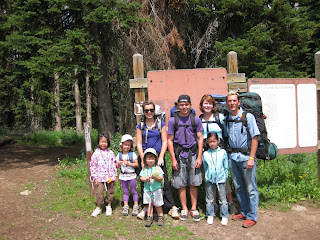 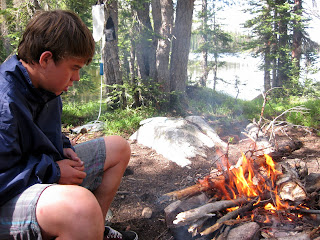 Gotta have a fire 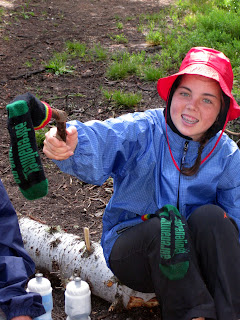 My favorite....the lovely hat to ward off the mosquitos, hooded for the same reason and of course drying her socks on the fire as it had just poured rain.  Looks like a lot of fun (for them) :)
They rolled back in Thursday....after I attempted running to the top of the Gondola and nearly died!   More on Thursday's adventure later this blog posting is too long already!