Summer is so much fun that I don't have much blogging time! 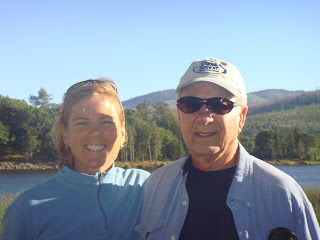 We had a blast camping at Lake Cuyamaca for Dad's 78th and the continuation of Riley's 14th!  We have it down now - kid packed the car while I rode 5:30 in the AM.  I rolled in, hopped in the pool, checked work/email, ate and we headed to the campground. 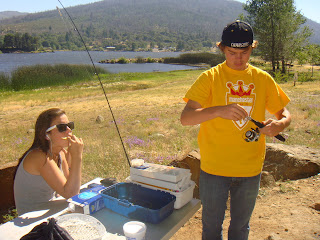 Dad and K were already there and checked into their cabin.  We went to work setting up the tent etc-  By 4 we were settled in and JD was fishing.  Riley fished for a bit but soon grew bored. Dad, K and I shared an nice bottle of Sparkling Wine and were thrilled to be the only family at the site.  Overlooking the lake was stunning.  The wind is pesky but did not wreck our fun. 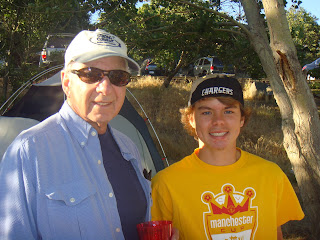 No luck fishing so I had to fire up the girl the the marinated pork loin.  K made Gazpacho and we had a delicious meal and Braman made it in time. Stressed from working days straight he let loose and enjoyed the wine and fun.  The coals burned out so we had to make S'mores on the camp stove but they tasted just as great. 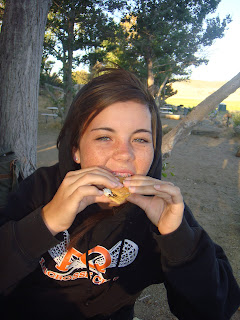 Riley was freaked out about sleeping in a tent with us so she and Zen shared their own 2 person tent- funny teenager :) 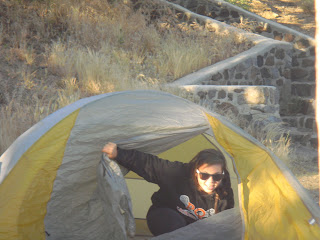 Usual night of camping....not a lot of sleeping and up with the sun at 5:30. Although I was so restless that I took a Tylenol PM at 2am and actually slept until 7:15- later than I do at home. Woke up to find out John had left at 2am because he could not sleep and Riley was up at 5:30 with her tent mate and JD was fishing. I was a bit groggy from the PM but felt good.

Thanks to our new stove and the French press I had great coffee within 10 minutes.  Breakfast was rushed as the kids had to get to Mission Bay for their pool dives.  All in all it was a great mini vacation and great family time!

So most big weekends mean epic rides....right !! Well for us anyway.  I had done this ride years ago with KP when I was a total rookie and the ride knocked me out for a few days. This time I rode from home to make it 130 miles and it was awesome!!  We rode to Dudley's' in Ramona, out the S2 to Anza Borrego and then up Banner Grade to Julian and back to to RB Community Park where most parked and then I rolled home.

We rolled early 6:30 from RB with a big crowd- James and Beth, Tim and Jen, Tati, Caroline, Liz, JB and me.  I always worry about big groups and long rides- they can take so much longer but were were darn efficient.  1st stop at Dudley's- well at the market and we refueled and Tim had to buy a cantaloupe. Of course JB had a knife and it was the  best darn thing we could have had.  Fresh, juicy and so delicious!!!

Tati the joker swipes Caroline's "powder" for a bit of doping humor!

And we are off!  Rolling toward Lake Henshaw but we keep going to S2 and it gets windy as we gradually climb and the we go screaming down for 10+ miles and it was awesome!  But well know what goes down must go up and then we started the 12 mile climb up Banner Grade to Julian. Actually not a bad climb- spent most of it with Tim and Jen and we saw James for a bit but that boy can climb and he was out of sight soon and did not see him until the top. He was probably on his 2nd  drink by the time I rolled up. Impressive!

Refueled- we sugared up, iced up and relished in the face that although we had 30+ miles to go, it was mostly down hill!  Nothing like scenic pictures at the Julian gas station. Seriously we are in an incredibly beautiful spot on a sensational day and we are snapping photos at the gas station..oh well it's just my blog and not Outside magazine.

OK seriously- what is with my hair- I look like Bozo the clown it curling out of the bottom of my helmet. New haircut for the summer- too short for hair ties.

Jen and I .....I have climbed more hill with this girl than I can tell you and we manage to chatter and yammner the whole way up.   Tim had to quote from some film "some of us are suffering back here." Ha he complains...the Dr who works all the time but manages to hang on the big rides!

So JB and I did the distance so we are ready for the death ride!! Right- well sort of...just another 7000 ft of elevation and we are good to go! Saturday will truly be epic!

Rest of the weekend was awesome! Soccer tournament for JD- made it to the semi's- disappointed to lose but sort of pleased to not be playing soccer on this holiday Monday!  Block party on the 4th- nothing like hanging out in the culdesac and walking across the street to go home. My kind of party- disappear at 9 to go to bed!!

And rounded out the weekend with an awesome swim this AM, coffee with a good friend and an extremely  enjoyable dinner with good friend and the kids all topped off with a game of  Spoons. Seriously- life is dang good around here!