I have started 3 blogs and finished zero...now I am weeks behind. So here goes the recap


Vegan or not…I feel like such a failure...but so be it

3 weeks of plant based Vegan diet and I wish I could tell you I feel great, my body is recovering faster than ever and I am hooked.  But honestly I am tired all the time, planning can be cumbersome when I am tired and lazy,  I wasted 2 dinners out where I could have enjoyed amazing seafood and instead had 1 terrible salad and some amazing vegetables but had to come home eat.  I like beans but I love egg whites… tofu and kale scramble is not the same.  But I am stuck with all the horror from Eating Animals but I want do is eat a few animals.

To be fair this 3 weeks of testing was not good timing. I have some out of the norm stress in my life that is causing me not to sleep and miss a lot of my normal swim bike run thus I gravitate to CrossFit where I can get out my aggression.  And when I can run, I run hard trying to pound out some of my stress…so couple lack of sleep in rapid increase in strength and high intensity, frankly what diet can repair all that.  And add the fact that my shoulder (torn labrum) has flared up and swimming hurts, I have a Baker' Cyst  on the back of my knee (and have been told no running for 2 weeks) and my left heel was bothering me, does not make me feel like plants are my friends.  But to be fair neither is too much CrossFit, no sleep, probably too much wine and random hard rides and runs. Can you say perfect storm.

I was emotionally committed to begin Vegan, I liked that it was a little bit hard…..but now I want easy.  It’s not that being a Vegan is hard – it’s just I am crabby and want a skinny mocha and a skinny mocha with soy milk is yucky  (yes I used yucky)  Petulant I know…. Honestly I want to have the option for organic, free range eggs and hope they come from chickens that aren't stacked on each other with toenails grown into the cages….and are killed humanely.  And I want the occasional seafood that is not altered, not fished to oblivion.  I have been in the habit of making informed food buying choices and think I will return to that.  I will be a Vegan with the option to deviate sometimes.  I love the tempeh and sprouted tofu but I love salmon and eggs too. Okay I can live without all cheese but I miss feta cheese.  So we will see where I go with this. Update after a week in FL at a meeting....i feel hard.  First night grilled lobster and sushi - fail I ate them both.  Next day at lunch hamburgers (no thank you) or grilled halibut- yes please.  Breakfast I was vegan, lunches 2 our of 4, dinners I had fresh seafood ever night and a fillet the last night.  oops....

If you are squeamish, think a pet should be put down at $1000 bill or don’t like dogs….stop reading now. Sometime last week, not sure when I heard a lot of licking by Zen.  He used to be an incessant licker but I put him on human allergy pills and his itchiness, licking stopped.  But was back…. the next day after a few shouts in the night “Zen stop”  I came in to find Zen aggressively licking his "member" and Mako standing over him looking it. If Mako had a bubble on his head with thoughts it would have said “dude, you have a major problem there.”  So I looked and OMG, 4x the size ( I am not exaggerating and I did not take pictures) but think of the STD websites that say if Syphilis goes untreated it will look like this and then make it worse.  Holy cow…off to the vet.  The entire office is in on this - they had never seen such swelling.  $500 later, sedated and flushed and call to me.  “please come in and we need to talk”  Bottom line this will not go away with antibiotics and will require surgery.  It was after hours and I left with drugs for Zen and he was crying.  I drugged him and he cried…I took him to the hospital and they agreed surgery but not until tomorrow.  More drugs and we  went home. He was in misery…. I laid on the floor with Zen and he finally started to settle and soon Mako joined the pack on the floor. Mind you we are having a heat wave and there I am snuggled with 2 dogs, 1 with a festering penis, on the hot carpet trying to sleep.  Drugs kicked in for Zen, wine kicked in for me and Mako and I went back to the bed. 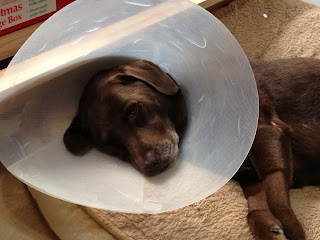 Took Zen to Veterinary Specialty Medicine in Sorrento Valley and they were amazing…. Surgery, 2 incisions, massive abscess removed, catheter and 2 nights in the hospital.  I could have a new bike with electronic shifting, wait I have one of those, okay I could have another one for what is final bill was.  But what I do have is a happy 11 yo chocolate lab who always wags his tail even with rapid infection and who loves everyone.  He is now home wearing the biggest ecollar imaginable, a t–shirt to cover the drainage tube and bulb (which has to be cleared 3x a day), lots of drugs and he is hungry and happy.  We call him crash…the collar is smashing into everything.  The drain is out and the swelling is down. His eCollar is trashed and we have 3 more days and the sutures come out.

4 days in Florida- Marco Island for my HPN Global Annual Meeting.  Meetings, training, trade show and no fun out side.  We had a team building on the beach - rained out, but not before at least 1 volleyball game. Our CEO put his arm around me after my 3rd dive into the sand and an expletive since we were losing and he said "its okay if you don't win"  What??? okay, message to settle down. The meeting was good, I was so busy that any downtime I was working and most of the nights I was dealing with issues at home. Generally when I travel I get better rest...this trip lets just say 3-4 hours a night was it. No running or training due to my knee..... ugh the off season weight is coming on.

And life goes on.... Vegan at home, 99% of the time, I did have eggs this AM but stuck with veggies and tofu last night, but out to dinner with Mom on Friday and I had grilled shrimp salad.  Ugh I am weak.. I am straying a bit- will see about getting back on board.  I am trying to drink my first cup of coffee in AM black-  no almond milk or sweetner and doing my first workout  coffee only.  Although some days that is yoga or walking the dogs.  Between injuries and the off season I am not really training, but will see how this pans out.  For my Saturday ride I had coffee only and then 1 hour into the ride had some nutrition.