I remember as a kid I had a favorite mug for hot chocolate or whatever warm I was drinking.  It was the big mug that said Le Chat. White with a blue painted cat.  I would look all over before conceding to another cup.  I still seek that mug out at my Dad's house.  I like big mugs.

Well seems so does the rest of my family.  We have turned into a family of tea drinkers.   Mostly at night- kids drink tea while doing homework, I have tea before bed or in the afternoon when I am freezing cold and Braman likes tea whenever.   I have tried to start my day with green tea with the idea of giving up coffee....seems I have only added a beverage but I have reduced my coffee consumption so we are making progress.  I can see in the winter forgoing the coffee for tea but I WILL NOT forgo my post Great Western Loop Latte- simply not an option.

So it seems we all have a fondness for one mug and it has become humorous to see who stakes claim on it first.  I have a slight recall on where it came from....but as luck would have it seems the hand painted mug is a rarity and now offered at speciality shops and simply not worth the money. So John took on the project and searched and searched for replacements that would be similar. Whenever in a shop that sells mugs he would seek out Riley or me and ask us to look at all the mugs and tell him what we liked or did not like. Really we liked the mug we had.

So today....after he left on a business trip the postman came with a box.  I take major issue when others open my mail or my packages but John does not seem to think it's a big deal, since he often "accidentally" opens mine. So we "accidentally" opened the box.  2 mugs - 1 is a winner- same company (ugly design) but the size, weight and lip is just right and the other is small....Riley says she likes it and gladly used it tonight. But we will really know tomorrow when there are 2 big mugs and we will see which one she seeks out. 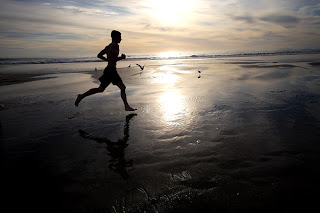 So enough about tea and mugs!  This is triathlon blog right.  Okay so my new mantra is "I am a runner"  Running is my weak link in the sport and I stress and worry about it each season and fear it in each race.  Last year at this time my hip was so jacked up with bursitis I could not run until February so there was no "build up your weakness in the off season" it was more like, play catch up to run a decent 1/2 marathon come Oceanside 70.3 at the end of March.

A few weeks ago I feared the same predicament.....6 stitches in November lead to "not right" tendons leading up to Arizona, a slip on the wet pavement felt like unnaturally stretching of those tendons and then it was 3 weeks of recovery from a long season.  When I started running end of December the tendons would swell, felt weak but not like something was getting worse so I started back carefully.  The next braniac move was the ice after my longest run since starting back that lead to 2nd degree burns and blister that covered my entire heel. Well that made running tough....so I cannot say I blasted out of the gates ready to run long and build strength. It was been one day at a time with increased frequency and duration.  Last week was a respectable running week with 5 1/2 hours of running without a long run- running most days and building frequency.  Nothing fast right now.  This week I am running every day for an hour. Not fast but all about building that base. 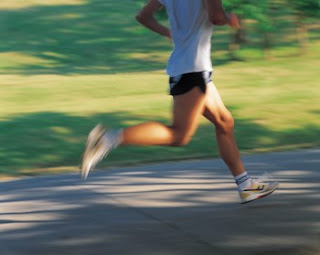 Last Tuesday I was struggling, thinking when does this start to feel better. My riding seems to be coming along and my swim still sucks but well I have only been in the pool 3x so I don't expect much more.  I slogged through the week and woke up Sunday without a run planned and wanted to run.  I started with Zen and after his 11 minute loop ( he will not go longer) I went another 35 minutes and it is loosening up and feeling better.

So day 1 of this week and it was great.  I am not wearing my Garmin, really don't want to obsess about the pace- want to enjoy the run!   I hit the trails and it was muddy and wet and beautiful. Cold and the play list was perfect.   As much as I want to hammer the bike and ride a lot as well, I know I am old and just cannot make it all come back at once.  I know my biking will come back with time so I need to take this time and build the run. Once the base is there we can start going faster!! I am excited for that- without an Ironman on the books I have no excuse to not be building some speed before O'side and all the reasons to run trails for Wildflower!


We had a sensational weekend....well mine really started on Saturday night when I returned home.  JD bbq'd Beer Can Chicken which was delicious and fun to see him so engaged and serious about it.  Sunday, after my run, I coached another swim session and it was awesome. So much improvement and excitement from the boys.  Straight to lacrosse where Riley's team played 2 tough games and home in time to change and hop on our bikes. John and I rode to La Jolla to see my bro and sister-in-law and family.  Crisp cold day and so nice to be out riding- hammered up Torrey Pines and oops dropped my boy. Kids met us there with the car and we had an evening of fun with the kids and catching up with the adults.