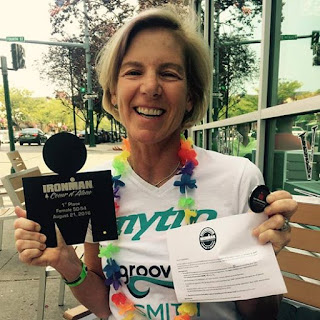 When your A race becomes a B race because you get 3rd and don’t get a Kona slot, you 1- get drunk, 2- get drunk and quit triathlon, 3- get drunk and decide to focus on 70.3’s even though you want to race Ironman 4- you get drunk ( see a theme here) and call up Coach and say “ hey what about racing Ironman Coeur d’Alene in 4 weeks?  “Crickets….. hello Mike, are you there?  Crickets……. Mike (coach) says let’s give it a week.

7 days later we “discussed” it and whatever I said was convincing enough to pull the trigger.  I was over the moon, had complete Ironman pain amnesia, what pain, what suffering, what WTF why do I so this sport, I was the panting puppy for a new ball!   Cool let’s plan another trip.

Thankfully my loving, adoring and committed husband said sure, I’m in.  And a  friend from “camp” offered the 3rd bedroom in his VRBO so this was just too easy.  It was only $750 registration, 2 airline flights and car rental and we were game on. So I went from recovery mode to “work for a week” and then taper again.

It was odd there were no “nailed it” kind of runs or rides.  I basically did nothing for 7 days, did a big week of volume with very little intensity, knocked out 1x 5 hour ride and a 10 mile run and it was taper time. I did some big swim volume as in 20,000 yards in 5 days at masters and worked hard.  And then it was hot yoga and 2hour aerobic rides or trainer sessions with a few short/hard intervals.  Running was 45 min or less.

I mostly did not really think about the training or lack thereof and just tried to roll with it, which is so NOT my nature.   I trusted Mike, mostly, when he said I would be fine, but did freak out a few times when I was alone in my closet crying. 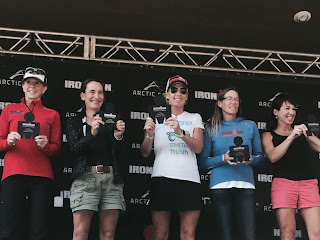 Before I knew it,  I was packing the bike, nutrition and getting ready to race….. Packing 3 weeks later is quite ease, especially when I had left all my gear on the guestroom bed.  And off we go to CdA. When Mike and I talked about the race I told him that I was assuming the 2nd loop of the bike and the entire run would be miserable. He laughed and questioned my race plan, even asking why would I even race with that kind of expectation.   I figured that was what happened in Whistler and I survived and had an ok race.   He suggested I think a tad more positively, so I tried. 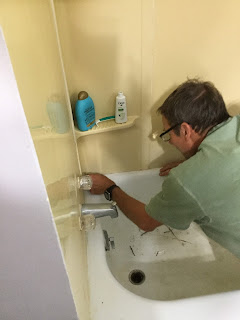 accommodations and was rationalizing a $300 a night Holiday Inn that was 5 miles out of town when John suggested I save my money for Kona.  Kona???? I say, I may die of heat or some horrible mold infestation and not qualify for Kona.  But I digress…. the sun set, it cooled off and my saint of a husband scraped out the mold with a razor blade and re-caulked the tub.   Wow is all I can say…. just wow, what a keeper eh?

Our housemates were awesome!   Couple from Seattle who I met at camp and their son.  It is always fun to stay with other racers.  And Bryan was an IM virgin.  Super fun and less stress when you have good peeps to hang with.

Race Day:
Swim:  55:49 Solid swim.  The rolling start was different than Whistler, it was one at a time through a small opening and running into the water.  Water was warm 72 and off we went. 2 loops with a run over the mat between loops.  Open water for the 1st loop was great.  The problem with a rolling start 1 at a time is it takes 20min to get everyone in the water, which means 8 minutes into the 2nd loop I am starting to catch others.  And it was challenging for the rest of the swim, for all of us.  The only suggestion I have for the back of the pack swimmers is to try and swim to the right or left vs dead center.  It is so frustrating to have someone stop and break into breaststroke.  I know it is frustrating for them as well to have people swimming over them, so we are both challenged.  One other PSA – don’t try and hold onto the buoy as you go around, first off it is an inflatable with a rope and second, it is not a pfd.  Swim wide if you want to rest.  I was expecting a much slower swim, so was pleasantly surprised to see the clock.  I swam harder (perceived effort) in Whistler and with much less crowds and had the same time. 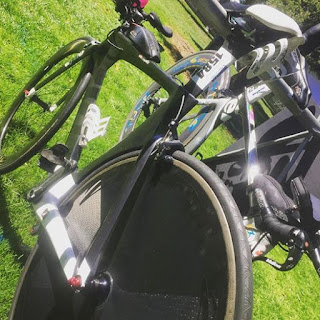 Bike
The new bike course could be faster than the old one as you are on one road, the highway for 2x 40 mile loops, so less turns but it is nowhere near as scenic and lovely as the course in 08 and 09.  I loved the rolling hills, small towns and lakes. The first 16 miles are the same as past years, where you go out past the lake and back through town and then you hit the highway, they close one side for out and back.  It is hilly with trees and nice views, but it is a highway.  There are some long climbs on the way out with some decent descents and u turn and you head back.   We had a minor head wind but not much to worry about.   And then we hit loop 2 and it was full on head wind, as in demoralizing head wind for 20 miles, as in head down I want to cry and punch someone and quit the sport which I did at least 3 times.  And my power was dropping and I did not feel great, legs were fatigued and it was time to suffer just like I predicted.  Before the turn around I decided to drop out after the bike and call it a year, it just sucked that much. I crafted my conversation I’d have with coach, John etc and be done with it. In a bar in less than 1 hour.  The one thing I did was stay on top of hydration and nutrition.  1500 calories of Carbo Pro + 250 calories of nut butter cliff bar and 48 oz of water per hour with 1600 mg of sodium every 2 hours.   I peed 5 x.  2x Motivator tabs (caffeine) at hour 2 and 4 of the bike.   Maybe……I was thinking I would run, just maybe.

Run
So even though I was dropping out, I decided to run through transition, and okay maybe start the run.  At that point I noticed my legs felt better than in Canada.  Really how? I died on the bike, as in power dropped 8 watts the 2nd loop and time was much slower (but that was also due to headwind) If power was consistent it would have been a good bike.  That is why power is golden- you measure your true effort, regardless of headwind, tailwind etc. In any case, power dropped because I was tired. 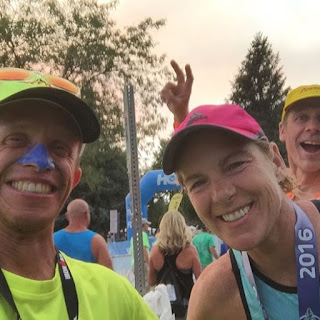 So the first few miles of the run were easy, and I was loving Ironan again, planning my trip to Kona, and thinking this is just spectacular, even though it is 91 degrees.  Soon thereafter I see my #1 fan and cheerleader yelling his heart out.   I needed intel.  Around mile 4 I see Angie and call out and she assures me I have a solid lead. By now I am not feeling all that stellar and am starting to question this whole idea again. See a pattern here?   The run is 3 loops – 2 miles through a neighborhood with some shade, tons of sprinklers and lots of people and music, then you run along the lake out and back for 5 miles, back through the neighborhood and toward the finish for loop 1.  It was hot- 91 degrees with a hot dry wind, Santa Ana type wind.  I really was feeling sorry for those still on the bike as the wind was picking up.  At this point I have the intel that I can #1 FINALLY win my AG in an IM #2 punch my ticket to Kona if I just keep moving at about this pace.  To think I have 16 more miles made me wish for an ice pick for my eyes so I moved to IM mantra, take one mile at a time.  I was able to get down 250 calories of CarboPro and The Right Stuff in the first 6 miles and I think that was what saved me.  John was freaking everywhere and I was so thankful every time I saw him. There were a lot of friends racing so with the 3 loops it was great to see so many familiar faces, give high 5’s or a head non.   My focus was NO walking and keep fueling. I hit every sprinkler, took every hose on me with the goal of staying cool.  I knew 2nd place was putting time into me and while I could not speed up I just decided to stay steady and as it turned out she slowed at mile 20.  At mile 24 it hit me…. ALOHA!  And an AG win.  The finish line of an IM is surreal but CdA holds a special place in my heart, it was my first IM and a year later my first Kona qualification. So running down that long street all the emotion built up and holy cow we did it! 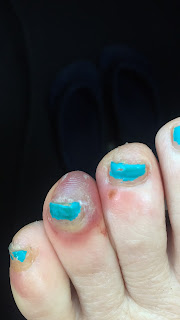 Crossing I found my buddy Jay and thank goodness as I was a but unsteady and needed a shoulder….it was surreal.  9 years and my 12th IM I finally did it.  The finish line was great- watching others finish and learning my swim buddy Kevin fricking one the entire race, another D3’r punched his Kona ticket – it was just plain fun!  The love of this sport is too much- at least for now.

Other race info. Swim- Roka Maverick Pro. Love this wetsuit- great fit and flexible in the shoulders.  Bike- Enve 60 in front and Zipp disc rear (thank you Les).  Wore aero jerey and tri shorts on bike and tri top and running shorts on the run.   Shoes- I had to wear my Bondis which are bit heavy but allow me to run without foot pain.  Hoka suggested I do down a ½ size to help alleviate my toe and insole blisters.  Good news is I did not have a big toe/insole blister but my other toes were ravaged.  So the Hoka blister dilemma continues.  But my foot is pain free! 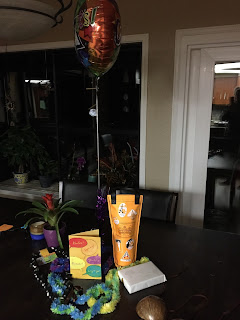