WTF happened is what I want to know?   It was not a terrible race, as in IMLT, but it was not the race I trained for. AND there is NO glaring reason....

Swim- super solid swim and I am happy about that.  This was a rolling start and I liked it, but think it is a cop out for Ironman.  I miss the adrenaline of a mass start and just don't see the risk.   I was within the first group in the water and we settled in a solid pace.  I was with 4 guys and we all swim the entire 2 loops together.  No formal rotation but it seemed we all took a few pulls.  I had to work to hang on and that was great.  I tend to get lazy later in the swim unless I am holding onto someone's feet. Alta lake is stunning and other than the first turn to the 2nd buoy it was easy to sight.  Note- wear tinted goggles as you swim directly into the sun on that leg and it is dicey.  Out of the water feeling like I had a solid swim, was a bit or a lot bummed one other girl beat me.  I  LOVE the strippers and the grass transition.

Bike-   I was feeling awesome heading to Callahan, watts coming easy and I was having to dial it back. This is going to be a good day!! LOL

Hydration and nutrition going well.  Climb to ski jump was just plain easy,  it was all about patience...until....  On the ride back toward the village I was feeling less than stellar and was starting to completely panic mildly worried.   On the way to Pemberton I thought and now know my legs were starting to cramp. But I refused to acknowledge them as I was not over riding and I was eating and drinking as planned.  Once we hit the out and back TT in Pembertom I was in full panic mode  I knew something was going South.  My "easy" IM watts were not easy and I was slowing down.  I felt tired, slow..were my brakes rubbing?  Did a bear fall out of a tree and onto my back?  UGH!

The climb back to town totally sucked was more of a challenge than it was in 2014.  I remember in 14 thinking, wow I feel awesome.  Sunday I was thinking, WTH I climbed Honey Springs 4 hours into ride and it was 110 degrees, I was NOT tapered and I felt a lot better.   I started my pity party but tried to tap into a positive attitude until I started getting passed.  FUCK - nothing more to say.  It was  freight train of people " On your left"  and my polite reply was "bite me"  This does not happen on the bike..... the last 20 miles were a ping pong of " I suck, there goes my race" to "come on its a low spot, just keep pedaling and stick with it"  to "everyone that is passing me is a doper"  to " just smile you will feel better "  which really is BS when you are not feeling well.  I forced the hydration and calories, even downed a bottle of Gatorade thinking I was low on calories. I popped a motivator, maybe I needed caffeine?   NOTHING worked.

I tried  to not think about the run, but come on let's be real.  It's hard enough to run a marathon off the bike when you are feeling good let alone when you are DYING.  I started to think about IMLT and what a death march that was- NOT happening again.  I not just collecting medal, I'll just quit and can be in a bar in less than 1 hour.  Perfect plan.

Into T2 and my 200 lb legs would hardly move. The volunteers were so nice and I tried to not drop 10 F bombs, so maybe only 4 or so in T2.  I did say "thank you"  as they did have to deal with my disgusting clothes, I am happy they had gloves on.

I "ran" out of T2 and was worried.  At 1K I see Les and I am not happy, shaking my head saying "this is not my day"  I promised to give it 5 miles and then I sort of laughed ok not really when I realized at 5 miles I would be way the heck away, but it was a good plan and kept me going. I was forcing calories and fluids I was suffering and not looking at my watch.  It was like mile 20 suffering but it was mile 2.  I quit Ironman 5x over the next few miles and once again asked "why the hell do I do this?"  I'm going to take up curling.

So around mile 5 I started to feel a teensy bit better, not yes feel great, but more like I don't think I am going fall face down and get eaten by a bear.  This is when you take it 1 mile at a time and just get it done. I had amazing support out there with my #1 fan John and Les (who had to drop out early due to complications) and Geoff.  I had one goal, just keep moving!  And I did - other than walking a few aid stations I never gave in and walked.

The big goal was to Kona qualify but let's be real here, with the slow bike I had and the shit run I was producing knew it was unlikely but you never know how everyone else is doing. Well that is until the girl who eventually won, ran past me like I was standing still.  Fuck!  I thought there was one slot and the likelihood of her falling down was slim, but I just kept running, as a bear could drop from a tree and crush her or she could bonk.  2nd place (well actually 3rd) was just in front of me ( as I did not see 2nd glide by effortlessly as I was crying or being a hater), I was within 20 seconds for a while and simply could not pass here. Around this time, the ice pick stabbing pain started in my foot and oh it would have been really "easy " to call it a day.  I'm dying, Kona is out and my broken foot is re-breaking.....but no not an option. So I trudged along, chewed 3xAleve and took 2 more Motivator pills and ticked off the miles.

Around mile 22 I gave up .... I'm well into 3rd ( actually 4th) who cares.  Well I do care, what if 1st doesn't take the slot, what if, what if.  Around mile 23 I decided to see if there was anything left and just picked it up- I started going hard and soon I saw John and he is going nuts, screaming, you are putting time into her  "run baby run"  And so I did and I could see Tracy ahead.  I got close to her around mile 25 and decided to sit behind her for a bit, but she hit the last aid station and started walking.  When she bent over  I went for it.  Ran by her like I was feeling great and just ran. I re- caught a guy that I had run with early on and he was walking, he yells "holy shit" and I say come come on. He starts running and says "I'm dying" I ask how old he is and says "29"   I tell him I am old enough to be his mother and to get his ass running.  We are both breathing like we were about to keel over and we just ran hard.....  this is why I love this fricking sport!   OMG you want to die but you are racing .....

I left it all on the course,  saw spots and nearly fell over when I crossed the finish line and was promptly taken to medical when they asked me my name and I asked for a hint - not a good sign.  I lost a bit of time as I don't recall getting there.... but alas I was okay in a bit and well I was 3rd NOT 2nd and there were 2 Kona slots and 0 rolled down.... UGH! UGH!!!!! 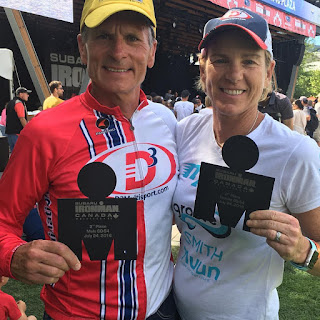 I love racing with other friends....was great so see Maik, Kevin, Lynne, Cheryl ( congrats on KQ), Peter and Sarah and more.... its what makes this sport!!

Ironman Coeur d'Alene in 4 weeks?  That was be ludicrous right? or maybe not?  That is for Mike to decide.

What happened? we may never know.....