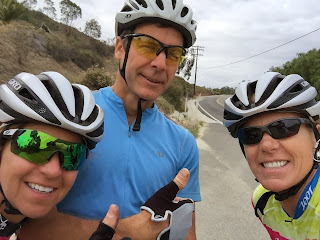 Yesterday at mile 74 Les made a snarky comment about #dbj and she flatted.  So she bought a rocking Gatorskin tire and could not get it on.  Plan was to roll at 8 - she arrived 7:45 and John was on deck ready to help.  The tire lesson was close to 30 min and very informative to Les, albeit she looks bored out of her mind. Many inappropriate comments, expletives but we were on the road 25 min later.  No worries, we have all day, and turns out we needed it.

On we go and today's guest rider was John, for about 4 miles, but we had one today.  thank you John! And we brought along #dbj.

So the 5:20 bike ride  took nearly 8 hours.. because.... late start due to tire change, 10 min wait for restroom at AMPM, than many pictures at Rainbow market because we thought Holy Guacamole was the funniest thing we have ever said.   The "bad" joke  which lead to a gash and a flat in Leslie's tire. Using her newly acquired skills she had that tire off, changed with Pitstop (oozing out), $ in the tire and back on in less than 1 hour and all is not so well...not quite back on.  As she is putting it back on I say turn the bike over, it's easier. So she does and now the chain is not really part of the bike anymore and it has 2 loops in it. 10 minutes later we have the tire on and try to roll it back, not working, wheel off and somehow Les undoes the "knot" while I am looking for the nearest Uber SUV.  We are now caked in crease but determined to finish this ride.

Climbing up Champagne we decided to see if we could recite the Lords Prayer- turns out we could.

We made it before dark.  No one was hurt,  We rode our 75 miles.  Got a killer core workout  laughing so hard. It was so bad  I had to pee in the bushes nearly on top of a beehive. And we did not have to call for a ride.  Leslie has really soft feet due to foot cream in her socks and bike shoes (seriously)

Good times... no food details today other than we both purchased unnaturally orange crackers late in the ride.