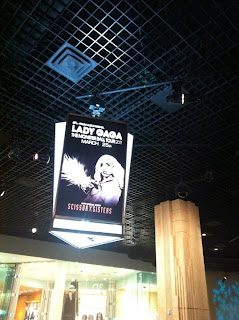 Well I pulled off a big surprise and it was sensational.....I was invited to the Lady Gaga concert in Las Vegas a few months back.  When offered I thought about and then asked if possible to bring a guest and if that guest could be my daughter.  The answer was yes and I decided to tuck the secret away for a while.

Fast forward a few months and the invite was still open and I decided to commit, book flights and make it official.  So then I sat on it and pondered how to let her know.  I waited and wanted to think about how to pull it off.  The only snag was when the dates came out for Riley's HS Lacrosse Tournament...wouldn't you know her all day tournament is the day after the concert! What??? I had booked flights and was planning a girls weekend.  Okay, regroup and rebook a 7am flight home Saturday AM!

So as the date approached I let the secret out to family and a few friends..and of course had to tell her brother.  While he has no interest in Lady Gaga the bigger issue was his 14yo sister was going to a big time concert before he had the privilege.  He was eventually okay with it, but still rubbed a bit I am sure.

So here is how it went down....I sent a note to the office requesting she be released 15 minutes early from her last class on Friday afternoon.  Meanwhile I had packed a bag and did my best to pick an outfit most appropriate for an event like this. (and I will have you know I did just fine)  She texts me as she is leaving the class, worried that something is wrong.  She also texted JD to see if "mom was picking him up to?"

Delayed flight but no worries..we bought snacks, Seventeen Magazine (something not usually my mojo) and we chilled.  Landed in Vegas by 7:00 and the hotel had sent a limo for us....she was dying. Gold stretch Limo.  Loved that she is texting her friends.".in the limo on the way to the hotel to see Lady Gaga"   Let me digress - I am not this indulgent nor would go to such excess for a 14yo but this is one of the perks/benefits of the industry I am in.  We were guests for much of this trip.
We arrive, change in 10 minutes- miraculous time and meet your hostess for dinner. After a sensational dinner at Diego at the MGM Grand we were off to see the master..... First off the crowd, people watching was sensational.  So many were decked out in Lady Gaga wigs, dresses, boustier's and hot pants, boots, as many costumes as you can imagine- well except for the raw meat - no one dared to emulate that one.
She was to start at 9 and we arrived shortly before then and the auditorium was packed- 14,000 screaming fans- sold out crowd.  She started fashionably late and was everything we hoped for and more.   Outfits lived up to the hype, her music was sensational, staging outrageous, back up dancers ripped and talented and she is a master!  LG talks to the crowd, is incredibly passionate about homeless youth and especially youth who are kicked out of their homes because of the sexual preference.  Her message is strong- be who you are and be proud of it.  There is room in the world for all of us.

As much as I loved LG watching Riley was every bit as fun- on her feet screaming and dancing the entire show.  As she replayed her videos she was laughing because most of what she heard was herself screaming at the top of her lungs.   She was one happy kid!  And I was glad to be there with her. 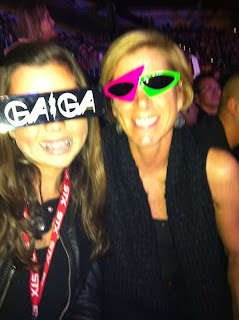