This has taken tooooo long to write…and has been in progress for weeks- so I am finishing it and putting up.

This is NOT a typical race report, so don’t expect the riveting information about what I was wearing, eating and drinking with detailed splits and power numbers.  Big sigh of relief from anyone reading.

A year ago the goal was to qualify early, IM Texas, recovery, take a small break and do a focused Kona build and try to FINALLY nail this race.   The fractured metatarsal threw a hammer wrench into that plan. Superseal did not happen, Oceanside was a cram session and the build for IM Canada went okay.  I came up short in Canada or truth be told, ran too darn slow and missed the slot. So the long Kona build from May that was pushed to July was still not happening.  So we hurried up,rested, trained a bit, and tapered and I qualified in Coeur d’Alene.  Sweet!

7 weeks for a not so ideal Kona build.   More recovery, training and tapering in a short window.  Along the way sometime before Canada I had a major setback with my metatarsal, one that the 1st Dr put me back in the boot and the 2nd Orthopedic suggested surgery, so I cut running to every other day, used the bone stimulator and raced 2 Ironman races.  Foot seems to be 90% ok  Last Orthopedic apt, Dr says, “just  keep doing what you are doing”  Okay….

Going into Kona I was not sure if I was under trained, still recovering or in a sweet spot.   Hard to say…. I can say 3 Ironman races in 11 weeks makes packing and planning easy, not much to re-do each time.

For me, Kona is the week of Kona and that was all I hoped for.  So much fun seeing so many friends from all over, running into competitors and friends every day, doing the casual taper training, eating great food and swimming in my favorite bay every day.
My coach and other D3 athletes were in town and we had some good comradery at the Underpants run and doing a bit of “group” training.  Next the kids, my sister and Mom arrived Friday and that make the usual pre-race jitters say at bay as I was so excited to hang with them.

Before I knew it, it was 3am on Saturday and I was once again drinking coffee and making banana pancakes for the big show.  I was calm and excited to get going…. Every time I do this race I feel like I know 10 more people, which makes more familiar faces, more friends to hang out with and waiting on the pier is just a big reunion.

7:05 and we are in the water, treading water and waiting for the magic cannon.  I enjoyed the swim, was never out of my comfort zone and was pleased to finally break an hour and take the AG win (in the swim) in Kona.   The bike was hot, windy and hard- hello, it is Kona.  I have ridden in better and worse conditions so no much to say, other than about 25 miles in I knew I was not all there.  I decided to not yell and scream and the Power meter, to not curse the wind, to not wonder why I do this sport, but to enjoy the ride and be thankful I am in the very race I worked so hard and sacrificed to be in.  I did that for the most part, definitely dropped a few F bombs in the head wind.

Seeing my family on the course was grounding and good reminder about how much I have to be thankful for.  Love and support goes a LONG way!

The run started rough, gee what a shocker.   While I was trying to find my cadence and deal with the next 25 miles I realize I was in between the lead scooter and Jan Frodeno (who was on his way to winning the race)  Helicopters, motos, screaming people as I am plodding along.  I was trying not to start crying as I realized he was finishing and I was on mile 1.  Instead I was thinking, how cool is this…. the IM World Champ is running alongside me, okay blowing by me, but you get the picture.   On to Alii drive and I found my legs and settled in for a long ass slow run that ended in the dark the marathon.  One mile at a time… around mile 7 I lost a gallon or so in the porta pottie and tried to be positive and think about how much lighter I must be now.

LOL  I was hurting on my way to the Queen K when I saw Michelle S and I nicely shouted “fck me” and she was great and said. “be grateful her are here” Thank you!  Attitude adjusted and off I went.   It was a long time and the sun may have been setting when I came out to the energy sucking lab that was as least 5 miles long and I was headed home.  It was not pretty and this is where I generally quit the sport, which I did, and I swear off Kona, which I did and convince myself that the strip of highway I am running on is indeed hillier than any other competitors. 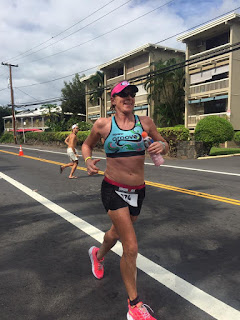 I spied or heard John in the near dark and he was his every so awesome cheerleader and I was not very nice.  He told me Riley and my sister were just up the road, which in my diminished brain state, meant a few hundred free not 2 miles, so I focused on being really mad at John for lying to me and came to an aid station asked for broth?  The Japanese tour group manning that station said “brof?”  Yes I say “chicken broth?”  Response “no cheeeken”  I say soup “oh yes soooop”   And before I knew it I crested the hill to Palani and soon found Lisa and Marcus who kept me company for a bit and then finally Riley and Kathleen, went by coach and onto the most magic part of any triathlon- the finish line on Alii Drive! 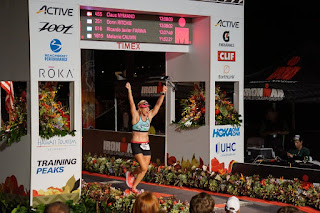 When you take as long as I did that day it is dark, yes, it is, so you are running toward the light, toward the “voice of Ironman” and the red carpet which makes me cry every time.


Kona # 5 did not disappoint, okay the race did, but the week was magical and having my kids, sis and 82YO mom to hug at the finish line is what life is all about!

cheeeken"h manning that station said "he hundered free not 2 miles, so I focused on being really mad at John for lying to me