Running trails.....I fall down but get up and do it again 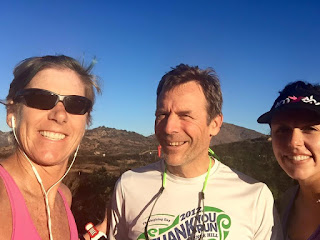 It's funny I was reading swimbikemom blog about trail running and was LMAO and than I paused as I had to reposition my hand which is destroyed from my trail run Sunday.

I'd love to share an epic tale of a treacherous descent and I was leaping past another runner and I bit it, but the truth is it was not even a trail really but more of a path on the way to the trail.  John and I were running along - 30 min warm up and John was running faster than I wanted to be running.  I was pissed at him and ticking off all the reasons I was feeling slower- I rode the day before, did a hard run blah blah blah, and I was admiring his speed and ease of running when I .....don't really know but was skidding face down in the dirt.  I froze.  Roo and Mako immediately came back  to investigate, waggy tails and tongues and I was not happy.   Took me a few minutes to realize I was okay.  I managed a pretty even fall as in, noting that not one limb took the brunt which would have resulted in a broken xx.  I landed on both hands, both knees and my left thigh.   My left had had a few rocks imbeded and is a mess and my left thigh is road rashed but all in all it was pretty even.  We resumed the run and I felt like a stud running with blood running down my legs.

The funny thing is last weekend John (roo/mako), Courtney and I did a trail race.  Lake Hodges 15K.  If you read this blog you know...my run always sucks !  Blah!  And I am always working on my run.  My goal is to run through the off season consistently - which has not happened in 3 years.... 2012  year I fell down the stairs and broke my leg/ankle - 12 weeks in a boot, next year I tore my mensisus (CrossFit), next year I "jacked"my shin - still not sure what happened... So you take a "non" runner and take her out of running for 10-12 weeks and well my run tanks. So the goal is - 1: stay on your feet.  Ok so I failed that Sunday but it was not damaging.  I digress.....back to the trail race.  It was for run "no expectations"

Start easy and build coach says.   So I did and was building into the run. At the turn around I was in 5th. 1,2,3rd were well ahead 5+ minutes but 4th was in reach, so I picked up the pace.  I would come on her and we would hit the downhills and she was a fricking gazelle flying over the rocks and I was a lead weight braking and almost crawling downhill.  Finally I passed her and there was enough runnable terrain to stay head. Final hill I see 3rd place, OMG she was dying big time.  So I go hard, see running down girls NEVER happens to me, so this was pure fun,  I was methodical as it was a long hill and as we crested I cruised past her with a HR of 189 and nearly passing out.  OMG....she looked at me and f'ng took off, as in 2 min/mile faster took off and the last .5 miles were downhill and rocky and twisty.... I wimped out....

Stayed in 4th and was pissed I did go for it happy I stayed upright!  until the following week when I feel on a flat road.

So I keep Johnson and Johnson in business.... 7 band aids each AM- 3  on left palm (with many replacements as they fall off from hand washing), 1 on each knee, 1 on shoulder.

So Saturday is another trail race- She Runs  1/2 Marathon- same run as 2 weeks ago but we go further.

I want to be that gazelle flying through the trails....then I see my race photos' and think wow "really"