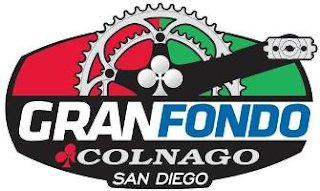 “Gran Fondo” means “Big Ride” in Italian
And a big ride it was.....so Colnago is the title sponsor and they sponsor the Women's Nytro Team and provide us with the hot rides on the TT Flight. So all of us who were in town lined up with the Ferrari's and Ducatis and lead the ride out of Little Italy. 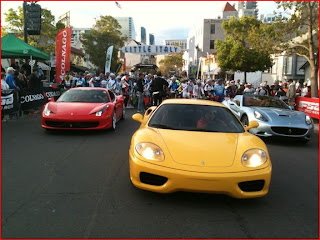 Sweet rides to follow.  Even Papa Skip was there to roll along! 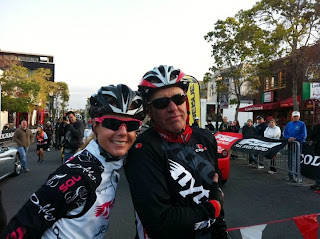 There were 2 rides - 60 and 105. Since it was one week post O'side and technically a recovery day I was planning on riding 60....well until Beth convinced me, after a few glasses of wine the night before, to do the 105 ez. We were all well fueled after a great team dinner of pasta and wine. 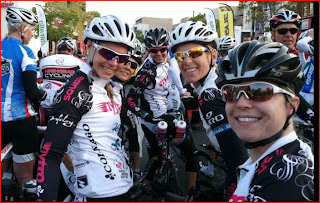 So we lined up and off we went. Riding out of downtown is NOT fun- crappy roads and very soon the scenery is wear house like and steel buildings, shipyards and lots of RR tracks.  Within 2 minutes, Polly had launched 2 bottles but no hard no foul. As we approached out (what felt like ) 10th set of RR tracks I was slowing down and the dude in front of my rolled over, bottle popped out and headed for me. Oh S&*T....missed my front wheel but rolled under the rear and then it is a bit of blur....but I was down- elbow, hip, knee and face bleeding. Thankfully it was cold do my arm warmers and knee warmers were torn and mild road rash on my body.  My glassed were jammed into my face, thus the slice on my nose and my helmet is sporting 2 major dents.

I was stunned, John was freaked out- he watched it all, but nothing broken, just  little air conditioning.  Team stopped and helped and off we went....we had spread out a bit so I was thanked for regrouping us all.  Hey, anything for the team!

After 10 miles or so Polly flatted, torn tire...thanks to John for carrying all one could need and more on his bike - so he had a replacement tire. This was going to be a long day- 13 miles and over 1:15 due to crashes and mechanicals.   At this point I decide that 60 would actually be okay as my head was pounding and my nose was not feeling right.
Once out of downtown it was awesome! Riding through the Olympic Training Center and all the way to Honey Springs was terrific.  Rolling hills, nice roads, little traffic and I was aero most of the ride with John tucked in behind me.  We missed the turn around and at the base of Honey Springs debated the 10k time trial but decided to turn around. The way back was nice but had a massive head wind.  I got aero and rode....my legs felt amazingly good considering I was one week post race.  We were flying past everyone and soon I started to hear different voices calling clear when I moved over to pass. I looked back to see we had picked up a nice pace line, well I had picked them up.  I was happy to pull and not looking for  a break so it was all good.

It was great until we got back into town...traffic, lots of cyclists and right across from the convention center we stopped for a light and I rolled, well so did a massive semi- There was a curb and no bike lane....holy cow I was freaking out- it was so close to hitting me....I did not know what to do- my right pedal was scraping the sidewalk and I was afraid to stop for fear of someone crashing into me- well of course I was the only moron to be wedged between the truck and sidewalk.  Scary.....again

Time to get off the bike!  Nice spread for the VIP's - yes we qualified and there were pouring chilled Prosecco but I passed...with a throbbing head and swelling nose, coffee was more in order.  Here is a shot of the leg....no nose shots as it is not bad enough that someone says OMG what happened. It is slightly swollen so my nose looks big, my eyes a bit sunken in and dark brown bruising across the bridge.  It is just enough that when talking to someone they kind of stare but not really and cannot figure out what is going on. 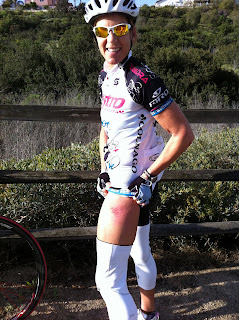 My bike....it is okay- brake is scratched to no end and bent- but rode it 60 miles and all seems okay.  Need a new helmet...this one did it's job but want a fresh one in case I need it to do it again!

Eventfull weekend indeed...... Rest of the weekend was dinner with family, hanging with good friends and JD grilling a nice Pork Tenderloin for us all to enjoy.