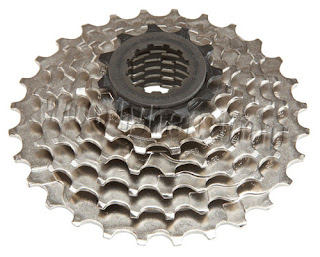 So I have always (in all 5 years of riding a real bike) gone with less gears is better...why, not sure.  Well to begin with I rode my 1st bike with whatever cassette came on it.  Flat, hilly whatever...I just rode the bike.  Then I bought my first TT bike and John says you'll need to change the cassette, it's too hard for you?  Instead of questioning what he meant, seeking to understand or learn about the bike I immediately was offended? Too hard, who is he telling me this. I had done 1 70.3 at the time and was riding alot of miles.   He handled it well..and let me go off ride up Highland Valley Road (which has some serious grades at times) with me 12-23 after I had been accustomed to a 12-25 and a compact crank.

I was dismayed...I had lost my fitness, had to stand up the entire climb, hated the new bike.....ah the light went on about 1/2 way up the climb that maybe I needed to understand what this cassette thing really was.

Okay 5 years later.... I was doing most of my training on an 11-23 and riding some serious stuff.  I went to a St George training camp with my 11-23 to ride the course and when Gordo (who is kind of a big deal and really fast dude) said he was riding an 11-28 with a compact and coach suggested I add some gears I began thinking....maybe this grinding and gutting it out was not the answer.  I finally gave in and raced with an 11-25.  Did I run out of gears? yes.  Was my cadence low? yes.  Did I have to stand at times? yes.  Did my race suffer? Hard to say, it was  good day for me.

I raced O'side with 11-25 and was fine, had a great race, but on the steep climb when I was forced out of the saddle and watched some strong riders seated and riding with a higher cadence I got to thinking they are not putting forth as much effort...or so it seemed.

After the race I changed my wheels and threw on the 27 for my last few rides...and holy cow I was amazed at how my power did not drop but my PE did.  I was able to keep my HR lower on the "wall" on the GWL and am starting to see the light that KP has been showing me for some time, but I refused to see.  I keep thinking big cassette = wimping out.  Just my own little issue... seriously if you can save energy then by all means. And I do not recall getting bonus points from Ironman for running an 11-23 when others were running 11-27.

So I had a little bike maintenance session going on tonight..12-27 off the bike, 11-28 (I know ginormous but Ultegra does not make 11-27, only 11-28) on the bike, a few adjustments and took it for a spin all is well.  Will get a few more rides with the new cassette before the sassy race wheels go back on and she i ready to roll for Wildflower.