Let me begin....this is not a technical review!  If you want the hard core review check out this review http://www.cyclingtipsblog.com/2011/02/quarq-versus-powertap-powermeter-review/. 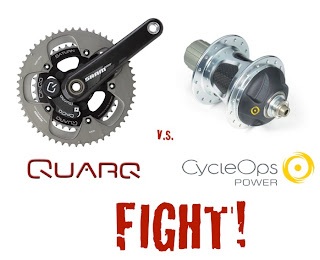 If you want my version....read ahead.  So let me digress....4 years ago when I was training for my first 70.3 (O'side) by the way, I did not even know what a powertap was.  I race O'side blindly..great bike split and blew to pieces on the run.  Similar race at Vineman 70.3.  Soon thereafter I found KP and he introduced me to power and explained the reasons why many choose to train and race with power.  For me it was not so much about using the power to nail hard workouts, it was quite the opposite it was the governor- the voice of reason.  Most of what I get from KP is DO NOT go over x watts.  It is a great measure of fitness and essential for me in racing.  KP lays out my target power for the race on flats, caps on power for the climbs....etc.  Takes a lot of the stress out of the race (unless I cannot maintain the power guideline and then well the race is not going too well- but that is another issue all together)

I soon invested in a PowerTap built into a cheap and heavy training wheel and we (well KP) began to collect data. A power meter is a device on the bike that allows measuring of the power output of the rider.  The PowerTap is a free hub power meter that uses a strain gauge that is located in the rear wheel hub to measure the power via the drive train.  Because the unit is built into the rear wheel you are stuck with that wheel if you want to use power. I soon relied heavily on power and realized that I needed/wanted power for my next race.  So....time for a set of new race wheel (with a powertap)  So that set me back a mortgage payment but I was dialed in and happy to be training and racing with power.

Well happy until....I realized I had one wheel option when racing- Zipp 808's which are NOT the wheel of choice in Kona.  Not for me anyway with the wicked cross winds coming down from Havi.  Too deep for such big winds.  Soon I realized I was stuck rolling 808's or faced with renting wheels with power ($$$) or not racing with power (potential blowup).

Hmmmm so I began reading and researching other options.  The SRM is the crank based power meter of choice and will set you back 2 mortgage payments- not an option! Soon I found the Quarq option .  Crank based (measures the torque applied to both pedals via strain gauges position within the crank.  The calculation of power is derived from the deflection the strain gauges and pedaling cadence) power means you can swap wheels all day long.... If not for the awesome sponsorship of Nytro and  Reynolds wheels I would be faced with having to buy new wheels as well without a power meter.  But thanks to their generosity I have sweet wheels for racing so could buy the Quarq.

This has gotten much longer than planned....bottom line, Quarq arrived and was installed - thank you again Nytro.  I was dialed in to ride.  But then it hit me- what if the power is different? How will I know?  Thanks to my genius buddy Brian who suggested I keep the PowerMeter + the Quarq to compare the data as they are measured differently.  Since they communicate to separate computers I decided to give it a go.

4 hour ride on Friday with both running. The data is 5 watts off- Quarq measure 5 watts higher.  Hmmmm- 5 watts is a lot when it comes to race.  So now what?   Well I will roll both meters for a few more rides and perhaps have to adjust my power guidelines based on the data.  The Colnago Flight is looking a bit odd right now with the Reynolds in front and the old heavy PowerTap in the back- but hey data is more important than looks.


When I rolled up on Friday- Beth looks at the bike and says interesting set up!  Right.....
Anyone looking for a Zipp 400 front wheel or a Zipp 808 clincher rear whell with PowerTap let me know....they are for sale- seperately or as a package.