Gravilla Femenina : An Intro to Gravel for Endurance Women

Wow, just wow is how I write the recap of my 3 day  Gravilla Femenina (women's gravel) camp experience.

I finished up Smashcamp, a 6-day triathlon camp felling fantastically fit, exhausted, and filled with mojo and energy.  I was so excited about the biking in January. My run is a bummer, but only because it is slow, pain-free is the best news, and I know it will come, and let's face it Ultraman running is not about being fast, so I keep my eye on my goals.

Gravilla Femenina camp guide said,  "come to camp with fresh legs"  well let's be honest, my legs were far from fresh, but I adhered to the rest of the guide about equipment and gear, and I brought my attitude.

This came was run my Jess Cera and Whitney Allison, women PRO cyclists, and ballers in the gravel.   The crew at this camp were some badass women, top-end cyclists,  including former pro and bad add triathlete (not me), so I am not going to lie, I was scared shitless mildly intimidated with this group.

Day 1: skills day We rolled out of Canyon Bikes at a faster pace than I would have selected and got to "Lemon Twist," and off we went.  Game on for some new trails, some I did okay on and others I was peeing my pants and scared, it was touch and go, and I did not crash but nearly did and was out of my comfort zone and my element. I crushed some parts and carried my bike on others, I was terrified and laughing and terrified.  I kept saying #thisisgravel

Day 2 Route here  Take a look, right? Cuyamaca, Mt Laguna -yup you got it but not Sunrise Hwy, not the 78 but trails all around, yes the ones that you see on your road bike and think ultra running or mountain biking, but yes we gravel biked them.  Not going to lie, it was the hardest, scariest, emotional day for me on a bike. I cried once, laughed a lot, said fuck so many times,  wanted to throw my bike - but I like her too much, was short with people, was intimidated, had some really proud moments, and was humbled to the core.  Initially, I was angry about how hard it was, but I came around to bucking up and doing the best I could, tried not to worry about the people waiting for me and did what I could.  If that meant bike on my shoulder, then so be it.   I started to learn to trust my bike and to believe in me.

At dinner that night, we had a great conversation about how hard it was and about growth.  It was 12 strong ass women, and I was proud to be in that group,  Can I tell you how tired I was, how smashed I was- I was! 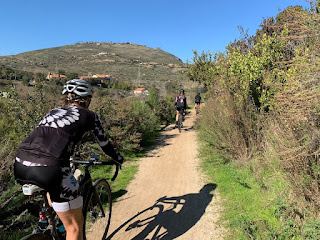 Day 3: Palomar, I woke up tired, 5 hours of sleep.  I don't sleep well when I am so so tired, and my readiness score 53 out of 100.  Ignore that.  Big breakfast of Kodiak Pancakes with almond butter, extra coffee, and my badass Betty Kit on and out the door.   I had climbed Palomar 9 days before, and here we go again but up Nate Harrison- on the gravel.  My legs hurt, I was not sure, but I found my groove and LOVED it - this is my jam.  When we hit the turn that was steep and on gravel with a few rocks, I laughed, because 3 days ago I would have gotten off my bike and walked, but now, not a big deal.  18% grade in gravel - get after it.  It was great!   We regrouped on top, and the descent was AMAZEBALLS.

So, I laughed, cried, got stronger, was way way out of my comfort zone, but am fired up for more.


com*pla*cen*cy
noun
a feeling of smug or uncritical satisfaction with oneself or one's achievements.

So I JUMPED out!