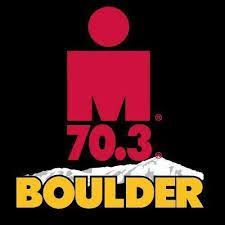 HIGHLY Recommend this race!!  here is my rundown

1- its FAST, partially because there is only 1700 ft of elevation on the bike and partially because the bike course is only 54.4 miles.   Funny how NO one mentions that on FB as they are boasting about their amazing splits, but when Ironman Boulder was 114 miles, EVERYONE had to mention it and some people even had 142.6 stickers made.  Yes it is a PR course but if you compare this bike to future races...you will likely be disappointed.  If it's your PR, I'd put an * next to it, but that is just me.

2- It's mostly easy logistically, as in it all takes place at the Boulder Res vs split transitions, which my last 2 70.3's have been.  So registration, check in and T1/2 all in the same location.  Registration and bike drop off were not an issue but race morning...holy cow!  miles of traffic backed up to get to the Res, with one road in and out, it takes some planning.   Transition was open 5:30-7 and my place was to arrive around 6, with my wave not going off until 7:53.  I allowed 30 min for the 15 min drive and arrived at 6:05, but those who were later were in horrific traffic jams.  Plenty of parking at the Res. Race was delayed 15 min due to traffic delays- plan ahead!

3-  Wave starts vs rolling swim.  While I have been quite vocal about disliking the rolling start I was eager for the wave start so I would know where my competition was.  But that being said it makes the swim a shit show.  Wave 14, at least we were the first women's wave, but I must have swam over 500 people. I just don't think elementary backstroke is the right choice for an Ironman swim as you cannot see where you are going and the up/out/together with 2300 people you are likely to kick 1 or 100 people in the gut.  If you are struggling on the swim, get out of the thorough fare and roll on your back, but around the turn buoy is not ideal.  While the swim was a challenge i did like knowing where my competition was - legitimately not with any delay.

1 loop swim and the res is murky, water temp 72 so wetsuit legal.  There was cloud cover so we did not have to swim into direct sun.  Easy in and out with time to warm up.

4- Big transition area so you can bring a back pack and set up your area, but again not big enough for a bucket or costco size beach towel.  I was in the rack of misfit toys as I signed up late so it was the rack that was added and almost in Denver vs the AWA racks near bike out and bike in.  You exit transition and run up a hill with your bike, I had bike shoes on and no issue there and off you go exiting the Res for the bike.

5-  Note the roads are not closed and there are not cones blocking the lane so be mindful.  And please for the love of GOD ride on the right side   There are a few areas where you maybe at mile 3 or 18 or on your first loop or finishing so please pay attention.    When you ride to the left, it makes others have to go into traffic to pass.

6 -  Run is flat mostly but on gravel and not a fast run- look at the times.  For the Coloradans and other mountain goats I would think a reasonable run but this is where the altitude killed me.

swim was uneventful, other that than the obstacle course of people and lack of of 02.  I held more of an Ironman pace as pushing too hard simply gassed me.   27:26 right about where my other 70.3 swims have been,

T1 uneventful other than I could not find my bike-  duh!

Bike as noted mostly flat with a few false flats and the Nelson climb from IM Boulder. Temps were warm but not hot and my plan was to ride harder than usual.  The watts were a bit lower but if you take the altitude into consideration they were quite high.  I felt great, strong and fueling was spot on all with Gatorade, 100% new on race day.  3 1/2 x 24 oz bottles of Gatorade for total of  630 calories or 250/hour based on 2:30.  2x 24 oz of water.  52 oz/hour.  I wanted to try the "new" Gatorade endurance, less sweet, to how I would tolerate it. Taking nutrition from the course is so much easier.  It worked okay I think.  I tried it as this was a B or C race - if I puked then so be it - good place to try something new.

Run - legs were stiff coming out of T2 and I'm thinking oh boy.... the idea of riding harder than usual sounded like a good plan until now.  What if my run split is slower than my bike split?    Mile 1 is great,  all the tri club tents, I see coach and wave and am asking am demanding intel, where is she, how many minutes back???  .5 of a mile and your are out of civilization and onto the dirt/gravel for a short downhill and then a not so fun mile ish up hill-   My legs are not cooperating and I am not happy.  At mile 3 the garmin is turned around I just run by feel, because looking at the pace was really getting me down. So I  taking it 1 mile at a time, enjoying the downhills and trying to keep my form.   It was not pretty and the pace was slow but I stayed steady.  I got some intel that 2nd place was 2 min back and running well, at mile 11 she blew by me and there was not even a choice to go with her.  She beat me by 1:16 - not a lot BUT a lot with 2 miles to go. From there it was bout holding 2nd and i was hurting.  At mile 6 and 12 there is a sharp left, steep downhill and u turn and back up, all on gravel, on the uphill I saw 3rd and nearly panicked, okay fully panicked. She is a MUCH better runner than I and I had one choice, bury myself for the last .75 of a mile and I did, panicking and looking back in the chute.    I beat her by 1:10.  1:53:03- my slowest run of my last 5 70.3's but it was enough to hold off 3rd and 4th.  The altitude is where I really felt the run, trying to push the pace and I just could not.  Fueling:  2 cups of water at mile 1/2/3 with 1 shot block each mile, 4/5/6 1 shot block and 1 gatorade, 7-11 screw the shot blocks,  1-2 cups coke every aid station with water+ ice over my head. At 1 hour 1200 mg salt stick + with caffeine.  11-13 fueled on adrenaline and determination- #notstopping. That adds up to .... you do the math.

While Boulder is not a  home town race it is close with my sis and family living there and D3 based there. Having coach on the race course is motivating and just plain fun!   The D3 tent and support of the team was amazing. Follow that up with  a BBQ at Coach's house and call it a fun weekend!

The Ironman train is leaving the station.....
Why NO pictures.... I was solo - but promise you I was there :)