To be healthy and racing is so damn exiting.  I had so much "fun" at Oceanside I was itching to race again before St George 70.3 in 3 weeks.  A few teammates are heading to Perris (note the E and 2x R) which is 75 min from here inland and North for the Big Rock Triathlon!  Cleared with Coach and I signed up. 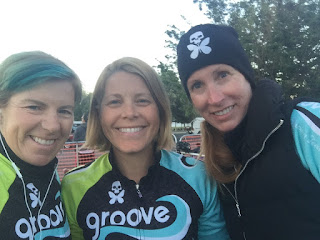 The plan was train as usual and race and resume training.  So I did hill repeats and a killer trainer session on Tue, hit the gym twice, backed it up with a solid run, 3 good swims and climbed Palomar on Thursday.  Showed up race morning tired but with a happy face.

Racing is 10x more fun with team mates and friends so I was happy to hang with Heidi and Liz.  Good to see a few other familiar faces as well. This race was polar opposite to Oceanside as in maybe 100 people total for the Olympic, Spring and Mountain Bike. Super chill and relaxed.  Smalll and no pressure. 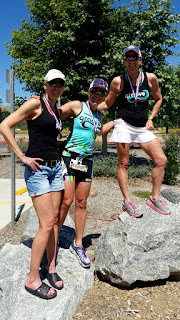 2 loops done 12 min XX seconds- gee think it was short.  As I am running up the beach on the .4 mile transition (not kidding) a girl behind me is yelling "hey the Olympic course is 2 loops"  I say "yes I know"  She says "but you only did one loop"  I say "no I did 2" She says (by the way we are running up hill in soft sand, my HR is about 195 after redlining a swim) "are you sure"  At this point I politely or not so politely say "mind your own f'ing business" She does not and says " I hope you did" I even less politely say "my last name is Dunkle- look it up"  Jesus....this is the 2nd time I have been accused of cutting the swim. Really people it's the run you ought to worry about... 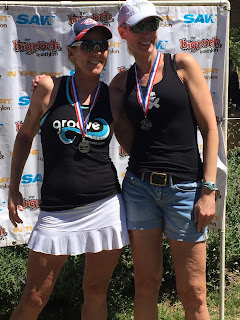 On the bike, no power, OK ride by feel. 3 loops and it is hilly and has some major wind. Fun times.... my goal was keep HR as high as I could, stay aero,  keep each loop the same speed and rip the down hills and repeat and repeat.

Onto the run.  So my biggest competition was Polly and she is a killer runner.  Welcome to my life.  So not knowing how far back she was it was hard to know what might happen.  She could easily run 1 min per mile faster, so I needed 6 minutes on her.  2 loop run course so at 1.5 miles I knew I would see her.... After the turn around I looked at my watch to see how far back she was.  Looked like she was over a mile back but I was running well and just held on.  The advertised course was flat and fast where as it was rolling and curvy.  Sharp turns and undulations but I held her off!  My run split was right up there thus it was a success!