From Tempe to Barcelona

Leaving the simplicity of Tempe, AZ where I was coaching athletes racing Ironman Arizona to the Mediterranean city of Barcelona is a big transition.  Sunday I was up at 3am with Leslie and on the road by 5 for a day of spectating at IMAZ.  The day was not as forecasted and in turn was cold and wet.  I managed to sneak in a 30 min run with Coach Mike while the racers were swimming.  Then it got cold...wet and cold.  We sought refuge and fuel in the Corner Bakery and then hit the streets for spectating. Watching my athletes persevere in the cold and rain was inspirational.  There were a few smiles, a few grimaces and lot of focus.  With 4 "kids" out there I was worried.  But they all finished!  2 became "ironman" for the first time, 1 PR'd and one sucked it up - hypothermic and gutted it out.  I was beaming with pride for their efforts.

I had to take off around 6:30pm to get to the hotel, quick shower and change and off to the airport for a 1 hour delay and a 9 hour flight to London.   I made the "call" to upgrade to priority+ for $300 and it was worth it.  Enough space to stretch out.   I took a night aid and closed my eyes for 7 hours. Whoa- ok so I don't sleep on planes but I did this time.  Woke up thirsty, hungry and wondered where
I was and why I was so stiff!  From there usual travel, flight delays and finally made it to my hotel at 10pm Barcelona time.  I don't even care to see what time it is in CA.  I ordered food and wine and fell into bed and actually slept.

OK well before I fell into bed I had to call the front desk to ask where the light switches were (yes I was sober)  Oh on the tiny touch screen on the wall, thank you.  Many languages offered but only Spanish worked - eventually got the lights off.
Alarm  goes off 5 hours later and I am pretending I don't know what time it is in CA- went for a run on the TM as I did not (yet)  know I was steps from miles of paved/gravel path along the Mediterranean.  And running in KM is like paying in Euro's - really not clue, just go with it and assume 7:00 miles and that every costs $1.  Rushed back to room- shower- ugh have to step in the stream to turn on, ice cold water and than scalding.  Ok so either freezing or burning.  Was super excited to have left MY shampoo and conditioner in Tempe but was thrilled to see the all purpose shampoo and body wash.  Out of the shower and no towels- seriously?  really do I have to use the floor mat or the hand towel.  So I do and get to the phone and call and ask "madam they are on the shelf in the bathroom"  Uh no they are not.  Seems housekeeping forgot all my towels that day.  But today I have 12.

Ok really I do travel - quite a bit and I have traveled internationally a lot, but maybe the jet lag- who knows.  But I am a pro now with google translate, currency converter and KM to MPH. All set.

6 hours on the trade show floor  actually went really fast.  Yes it was a lot of work but it was all good.

Coffee/espressi everywhere- almond milk not so much. Ok, when in Barcelona drink cows milk.  I can make that compromise but what is the Spanish obsession with jamon (ham)  it is in nearly everything and at the reception(s) last night there was plenty of it - full legs being carved, flattened and stuffed pigs.

Yesterday I tried my Spanish asking for jabon (soap) at the front desk and my pronunciation was so good the front desk agent escorted me to the breakfast buffet an showed me all the jamon.  So no ham or soap for me in Espana.  Even the marcisos" "seafood" paella, giant paella,  - great seafood but after a few bites I realize of course there is jamon in it.

At some point along perfect sense to give up on the food and start drinking martini's.  I don't drink hard alcohol yet somehow it seemed like a good idea on an empty stomach, jet lagged and after running 10 miles and working all day.
the way (last night) it made

On the way home "we" detoured to Burger King and even than I could not succom to "animal" carnage, so I stole a BK crown, drank water and went home to my Zing Bars (and maybe a can of gummy bears from the mini bar" 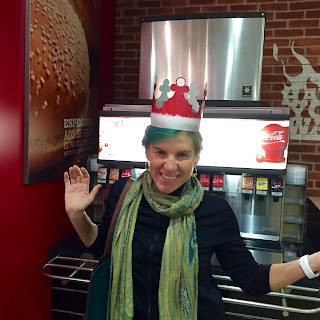 Can I tell you how awesome I felt today!