We have been talking about riding and camping for a while and just have not done it....until now!!!

﻿ Now this will only work if you have a good Sherpa...and we had 2. Gunnar (Liz's husband) did the bulk of the hauling...we dropped off all our camping gear on Friday night. Riley and her friend brought the cooler and dogs on Saturday afternoon.  John elected to drive out with Gunnar after a restless night sleep.

We rolled at 8 and headed to Dudley's with Amy and Kevin and hit it a little hard.... they turned around and we headed to Lake Henshaw- nice rollers and a bit of elevation. Turned right on S2 and more climbing and we had a wicked tailwind the last 10 miles to Banner Grade was fast and downhill.  FUN!!!! 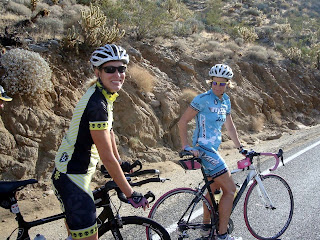 Here is where the ride got really ugly got interesting...Instead of turning right toward Banner Grade and then a quick left on the S2 we continued on the 78.   I heard a text come in but we were flying downhill with a massive tailwind and stopping seemed too hard (really dumb NOT to stop at mile 2).  About 10 miles into this ( after Liz says "I recognize this- we are on the right road)  my phone rings and it is John.  I decided to check and see whathe has to share... first I see the text "you are headed to the Salton Sea!"  Gulp....I call John and he says we missed the S2 and are headed the wrong way.  OH F!!!  Pull up the map on my phone...Liz does not believe it until I zoom out and we see the sea.... so we turn around and ride uphill 10 miles (about 1000 ft) into a brutal head wind.( i know this sounds like walking to school in the snow barefoot- but this really was the case)  It was slow going...thankfully John and Gunnar came to find us as we were out of water and out of calories.  We filled up, snagged pop tarts from the truck and hit the road.  So 97 miles was going to be 117... and on we went.  We found the S2 (now this is NOT my favorite road- 3 summers ago I went down on some sand and was basically okay but banged up and bruised and 2 summers ago Beth, KP and I nearly died as it was 110 degrees and the store was closed) I digress....anyway we are cruising along with a reasonable tailwind.  I have my head down and I am ticking off the miles,  I ride by a sign that says Agua Calliente Hot Springs and apparently it also said Campground but nothing else.  I hear Liz yell and I turn around and she is fine so I keep rolling...about 5 miles later it dawns on me that maybe Liz was yelling because we were suppose to turn,  I see my mileage and know for sure I was suppose to turn.  So back into the head wind and I am going 5mph and I am very sad....... it is now 3:30 and seems to be getting dark and did I mention I am very sad.   I am also remembering there is no cell service at the campground-  hmmmm. And I see a tarantula walking along that seems to be keeping pace with me.   I hold onto the fact that Liz turned and must be close to the campsite and will let someone know I need rescuing.  Yes I am done!! At 125 miles, with 3 miles to go - into the wind, I see a knight in shining armor or Gunnar, same difference to me.  I am off the bike and in his car...before he can really say much.  Thank Goodness!!!  THANK YOU GUNNAR
﻿﻿﻿﻿
Long day...but the campground has showers - YES!  and we are clean and eating real food by 4:30...we are eating and eating and eating.  It is soon dark and we ( okay John)  make a fire- enjoy a glass of wine and I am sure it is time for bed.  Liz reminds me it is 5:45.  Oh.... a tad early for bed.  So I walk the dogs into the desert into the night and hope when I let them off leash they don't get stung by a scorpion, bit by a snake, eaten by a coyote...and lucky for me Mako tears all over but zig zags back to me frequently.  Its now 6:30...can we go to bed yet?  Riley and Erica are back from looking for pie and wondering what we are going to do.  When I suggest sleep they roll their eyes.... so they move their tent and decide to pack it in and sing and talk.

﻿﻿﻿﻿﻿﻿﻿ 7:30 Liz and Gunnar go to the hot tub and we go to bed.  I am ready to sleep...2 awesome air mattresses that were not quite filled up with air so when you move your elbow hits the ground  and we have 2 dogs who have zero interest in the nice camping matts we brought for them.  So I spent most of the night spooning with Mako and sharing my pillow.   After being dehydrated on the ride I drank 4 bottles of water and thus had to pay the piper with late night potty breaks. So much for sneaking out to pee in the bushes- Zen and Mako had to come and have you tried peeing at night in a bush holding 2 dogs who want to explore. We herd back in and "sleep" for  few hours and repeat the trip outside. Mako sees something and starts to bolt.... I nearly fall over.

Oh and did I mention there was a full moon.  A full moon camping is like sleeping under a street light- it was awful.  The moon was beautiful and I love nature.  6am could not come early enough..John was kind enough to take the dogs on a long walk and I started packing up camp.

We were on our bikes by 8 and rolling home....only 80 miles today and no chance of getting lost!  My sit bones were sore, legs stiff but all in all okay.  The 22 miles to banner grade with a headwind sucked big time  was great mental toughness training and race prep for a windy Ironman.  Left turn and up Banner Grade to Julian.  Climbing was fine but the temp was dropping for sure....we hit Julian and everyone has on winter coats, hats and gloves. Riding along in spandex and arm warmers was a tad chilly.  Julian Pie Company here we come. Large Mocha and a cookie and we are rolling.. the lower we got the warmer it was by the time we hit 67 we were pretty darn happy.  Last stop near Highland Valley Road and the guy behind us is buying a quart of Malt Liquor saying he used to put that in his bottles when he Mountain Biked...he creeped me out and Liz felt sorry for him.   John was on his own ride...but managed to meet the same guy shortly after us.

And we were home by 2:00 and manged to pull out what seemed like every morsel of food from the fridge and eat and eat..... What FUN!!! Next riding-camping-riding will be to Lake Cuyamaca,

Thanks Gunnar and Riley for driving and being our Sherpa's