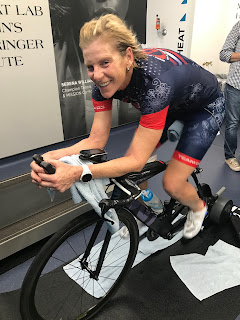 Today I paid a lot of money to sweat out 6.7lbs, get my core temp to 103.9, see lots of black spots and have to end the session early due to delirium.  Hey it was just like racing in Kona.   So mission accomplished.

For the past 24 hours, I have been urinating in what looks like a portable gas can.  At 2AM I swallowed a thermometer pill.  I have recorded in detail everything I ate and drank since noon yesterday.   I showed up at the lab at 8, was given my freshly laundered bike kit and was soon walking into the death zone heat chamber, which was set at 86 degrees and 78% humidity.  aka Kona conditions, except for last year, Dr. Rob noted because WE ALL KNOW LAST YEAR WAS THE BEST CONDITIONS IN KONA EVER! NO SHIT I digress, I walked in and said “fuck it is hot” 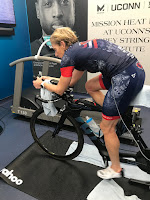 Onto the bike for a 2-hour bike session at IM watts, GO.  This was not as easy as I hoped, in fact my RPE was very high, and I am hoping the Kickr was not calibrated or I am looking at a 7-hour bike split.  I held the watts mostly and when my HR started to go up, instead of backing off as I would in a race I just let it go up.  Apparently, that is not a good idea, my core temp was going up too and let’s just say a 2 hour IM bike workout soon felt like a 2 hour FTP test.  3.5 bottles later, lots of good tunes and a Netflix movie “Kim Swims” which I highly recommend, I was done.  Meanwhile, I am wiping sweat, Maggie was wiping sweat and they were collecting sweat.   Dr. Rob is monitoring my core temp and every 10 min they ask on a scale of 14-20 how are you feeling.  Right, what is up with the scale, not 1-5 or 1-10, but 14-20 (it’s actual correlation to HR- 14 should be around 140…”

Then I climb in a giant tub lined with plastic and using distilled water I am washed down, scrub and wash.  I leave my clothes, the towels, and all the yuck and climb on the scale.  Done with test 1.

Gulp down 24 oz fluid  + The Right Stuff and force in a bagel and PB and sit in front of a giant ass fan.  Meanwhile, they are monitoring my core temp, which is taking over 45 min to return to normal.  Normal, okay let's go round 2. 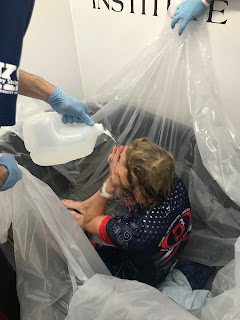 The run, 1 hour, TM at IM effort in the same unreasonably fucking hot temperature Kona condition heat lab.  Music on let's go.  OMG its hot, its really hot, I slow the pace and decide to just run easy, shit I don’t want to run that easy, pick it up, okay it’s only an hour, if you run this pace in Kona, you are golden, 25 minutes, no way can I run this pace, okay slow down, running a bit slower is better than walking, okay this is better, not really but pretend it is, OMG my HR is 165, not really IM heart rate, only 30 more minutes. Then it's like someone turned up the heat and it was 105, HR is over 170 and the spots start to come, dizzy, spots- both white and black, people asking “are you okay?” Me, not really, so I walk a bit, okay 3 min walk, feeling better not really but lets fake it God it’s hot, “did you turn up the temp?”  Maybe its really 100 degrees, oh boy super dizzy, nausea.   Hey, it's just like being on the Queen K. OMG did I pay for this?  WTF.  Run over, what? What, why?  Seems more core temp was 103.7 and climbing.  Dr. Rob says, we have what we need.

Do the baby deer wobble to the tub, rinse wipe off and onto the scale again. I have been weighed more in 24 hours than I have in 10 years.   Sit in front of big ass fan and rationally decide to cancel Honu, cancel Kona and sign for Alaska Man. Seriously…

Dr. Rob says, well it's clear why you have issues, despite all the fluids you are still down 6.7 lbs.  Fuck!  Can we move IMWC to Antarctica?

Next? Full report early next week.