This past weekend I had the opportunity to race in Cleveland, yes epic Cleveland said no one ever, apologies to those who live in Cleveland.    I’ve historically passed on the opportunity to race this race primarily due to my focus on Ironman and 70.3 racing.  With this year being about “something different” and my coach forcing strongly encouraging me to race, I decided to go for it.

The training was not 100% Olympic Distance focused as I did race Whistler 70.3 2 weeks ago and I am FINALLY starting Ironman training, but I did my fare share of short and hard on the bike in an attempt to get accustomed to 90-95% efforts on the bikes and well my run, we tried.
I booked a place with Coach and one my athletes in the “not re-gentrified” section of Cleveland.  Literally next to the airport and under the flight path, this turn of century house was just fine.  Affordable indeed, clean and actually worked well for the 3 of us as we were up early so the planes did not bother us.

Getting to Cleveland is not easy as in no direct flights and well its further than I was thinking, as in nearly all day travel  +3 hour time change.  So, we settled in Thur PM in time for dinner after hitting the Whole Foods!  YES 3 miles from us - so a big win.  Whole Foods can make up for a lot!
I had very little anxiety or nervousness, which has been the case for this year to date,  saving it all for IM COZ.  Friday was a nearly all-day event .  We started with swim practice, in the lake that was just closed for eColi and was 78.5 degrees so no wetsuit, did a quick spin of the run course which was NOT flat – legit for sure, a team D3 lunch, registration, bike check in and well that somehow nearly took all day.

We settled in early and cooked at home and off to bed. Up and out by 5:15, we ubered to the race due to logistics and our driver entertained us with stories that included his pistol, his dog killing a deer and the SWAT Team.  We are very far from Encinitas!  Onto the race venue for the announcement the water temp was 76.7 so it was wetsuit legal.  I am very sure they put an ice cube in the water with the thermometer, once again dumbing down races to make sure they are not “too hard” The water was HOT. 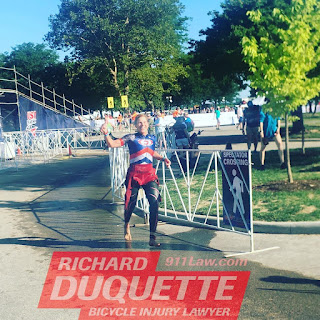 I was wave 13, so I have 1 hour 34 min to wait which was fine as there were plenty of people to hang out with, warm up, nearly watch the 1st wave finish the whole race and for the wind and chop to pick up.  The calm lake at 7am was chopping and wavy by 8:44. Water start, and we got out fast!  I was on the feet of another competitor and we were swimming flat out and it was choppy as can be.  Silly me thinking like an ocean that once we got past the “break” it would flatten out, but the wind was picking up and it was one of the tougher swims I have done with wind and chop the entire way.  Course was long 1700M vs 1500 and times were slow.  25:55 and a longish transition but I was quick and on the bike.

40K is all out and I was getting after it.  First U turn the volunteer was blocking the signa and waved me right, Fuck I am on the run course and everyone is Uturning and I am riding down a hill, turned around, rode back through the runners and was back on the course, extra .3 miles, which in a short race can make a difference.   I was hammering to repass the competitor I had already passed early on.   The first 6 miles the road was shitty and the scenery similar and then it was smooth roads and quite nice, just after  the turn I passed her and was doing all I could to hold onto the lead, knowing how fast the runners were behind me.

T2 in and out and onto the run and well just did not have my run legs.   It was a struggle, so I turned my watch around and dug deep and did my best.  Around mile 2 the eventual winner flew by me and just after mile 4, 2nd place came by and I was hurting.  I could see 3rd gaining on me and I just did not have it. she passed me just after mile 5 and that was the steepest hill, I did not have the mojo or legs to power up the hill and stay with her.  Looking back I am wondering if  I gave up but well my HR was 181 so no I did not but I was definitely dehydrated and had nothing in my legs, so then it was my goal to NOT get passed again.   Quick finish and a short run course- THANK YOU USAT!  But well it was not a stellar finish and everything went very fuzzy and spotty at the finish line.  I had them take my temperature and it was 101- I was way OVERHEATED!!!  My error, I only had 22 oz on the bike and needed another 22 oz and the run course was so crowded I missed most aid stations.  Dehydrated for sure.

I was honored to stand on the podium in 4th – Way out of my comfort zone an happy place of long distance racing and I did not take my slot to Worlds in Switzerland- as lovely as that sounds, I have other goals for 2019.

We found and AMAZING place for dinner and really wanted to drink it up but Mike and I had the sprint the next day so we ate up instead and consoled ourselves with chocolate and Ben and Jerry’s.
Groundhog day on Sunday and in the car 5:15. Arrived hoping for NON Wetsuit but instead we hear NO swim! What?  Ripcurrent? In a lake? Are you kidding me?  I guess it can happen and with the tragic passing of a competitor the day before, nothing to do with currents or water temp but a heart attack, I am sure they were playing it conservative.  Ok so the race was now 2.5 Krun/12 mile bike/2.5  -seriously this is what I dread the most in this sport.  So, 2 choices, don’t race or change the mindset and roll with it.  I went for #2.  And I had 2 hours- yes 2 hours to think on that.  Wave 14 today so I got to watch 1000’s, not kidding, start and finish the race.    Finally, our turn!  TT start on the run, 4 at a time.  Off we went and holy f they took off running, I got after it and ran 7:04 for the first 2.5K and that put me in 4th! Lol so onto the bike, already in 4th, I went to work with what I had and that was not much, tired, tired legs and watts were about the same as Saturday.  So, lets just say I was no reeling in people, managed to pass one.  Onto run 2 and I was cooked, up that dang hill again and there were a LOT of F-bombs, how can 2.5k hurt so much!  I did the best I could and ended up 7th.   The difference between3-7th was all in minute, but with the TT start we were not racing head to head, no excuses, it was just how it was.

All in all- the weekend was a blast!  Really happy I did it, over 5000 athletes over the 2 days.  We ate our way through Sunday. Amazing breakfast spot near the race Toast OMG it was like being in Encinitas.  Fried eggs, spinach, sweet potatoes over thick buttery sourdough toast!  Nap, chocolate and a decadent Italian dinner with wine, homemade pasta with scallops, spinach, garlic and a lot of butter and cheese!   You gotta let go sometimes and it was just plain good!    I was out of my comfort zone again, trying new races as planned and had so much fun with Coach, Cindy and the other D3  + San Diego friends in town,  It’s why we race!

All was good but needed more fluids on the bike - another 12-20 oz with Nuun would have been ideal !  I was finished with my bottle at mile 12.  Ooof- bad move on my part.