Some days are epic riding days.....and then there are days that are NOT

Saturdays 80 mile ride plan was roll at 5:45 to knock out the ride early and get on with the day!  I had lunch plans with an athlete and allowed PLENTY of time for any unforeseen issues, or so I thought.

5 min into the ride Lil realizes she has a snapped cable and cannot get into the big ring, ride killer for sure.  So she had to bail and was back in her car by 6am.

Les and I rolled along making 2 Garmin stops as her Garmin was "misbehaving"  Should we have been wary?  No, because during a garmin repair stop when I hopped in the bushes I found this card (see below)  and thought it was sign.  I gave it to Les and said " we are good for the day"  One time ticket... 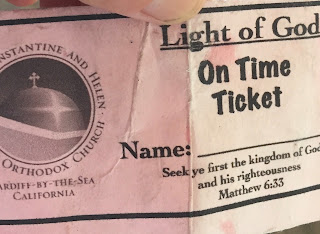 Well it seems we were NOT good

At Garmin stop #3,  I realized my aero bars were loose, well one of them was. 2 or 10 minutes later after I remembered righty tighty lefty loosy we were ready to roll out of the prickly bushes and gravel that likely had glass in it and I realized I had a slow leak.  Lets make this 15 min stop a 20 min stop and change it.  Instead I decided to use Pitstop which may have been 1 or 3 years old and was rusty and nipple kept flying off. The Pitstop  was mostly in the tire and my wheel looking like I rode through snow, I spun it around to "distribute the sealant"  Tire a bit low so I top it off with C02 and BOOM.  Tube #1

Quick(ish) change after I threw my tire levers in the bush and then picked them up so I did not litter,  after using Les' levers and new tube filled and ready to go.

On we go up the 79 and BOOM - Tube #2 (lots of possible reasons why, one being operator error and many others being from above)

We pull over again and change it again, with Les's levers and now her tube as mine are used up.  Fastest change yet and we are good to go for 30 sec and it goes again. WTF!  Tube #3

Clearly there is something in the tire, which we take off, again, turn inside out and lick the entire inside, okay not really, but thoroughly clear and check and check the wheel and Les now gives me a tube but the valve is too short, so I steal the extender off my front wheel and inflate and nothing.  Okay do we try one more, sure maybe I screwed up for the 10th time, and the CO2 goes in and out.

So Les now has 1 tube and no C02 and I have pile of gear and we are 40 miles from Nytro or home and John is working so I call Lil who is free due to her bike mechanical but she is 50 min away.  I try uber/lyft and find a driver 12 min away, which really is 30 min because the lyft map pings me 6 miles from where I actually am because I am jinxed on this day I send Les away as the driver is on her way or not.   I am in a safe place, reasonably so and Shannon, Lyft driver calls and says she is at the gate.  What gate, we then realize Lyft has picked a random address 6 miles away.  At this point I start to lose it, Shannon is very nice and patient as I drop a pin and text here.  30 ish minutes later she arrives and I get in her white car with white leather and I am covered in grease, tree sap (no clue) and dust and dirt from sitting along the road.

She happened to be in Ramona, thank you lord (see he was looking out for me) but she lives in Oceanside. She was up early picked up a guy in Oceanside who needed a ride to Ramona.  Apparently he got in her car and said "since we have nearly an hour drive, I may as well tell you, I went out last night in Poway and woke up in Oceanside and I'm not entirely  sure how I got here"  LOL... thank goodness he was drunk and far from home as she was THE only Lyft/Uber options.  She used her Reiki on me, I guess she could feel a lot of my energy and let's say it was not the best and she gave me a great sunscreen tip, as she is also an estthetician.

I arrive at Nytro by 10, I have been up since 4:30 and ridden 28 miles.   30 min later  I am done.  Nothing wrong with the tire - the last tube had 4 tiny holes but no clear reason why.  Restocked and started my ride again.....  Found Les near Rancho Sante Fe, she only had 90 min left and I had 3.5 hours....  I was finishing in Elfin and deciced to  call it a day and go home and then I realized my car was off Lomas Sante Fe...nearly 9 hours later I had forgotten so I pedaled along back to my car.

For the record.....I am not a complete idiot about my bike.  I am actually pretty good- I can change ac a cassette, my brake pads etc- and I thought a tube. I better practice 5 more times.