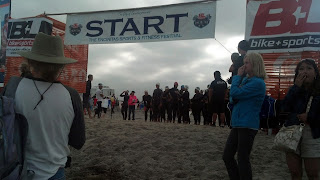 The Encinitas Sprint Tri was this weekend....a special race for me as it was my first real triathlon 6 years ago.  I had done one other and they cancelled the swim ( so that does not count) There were big waves 6 years ago but not as big as yesterday. 4-6 feet and it did not let up. Thank you for NOT cancelling the swim.

Elite wave went off at 6:40 and I did not start until 7:48 so I had the benefit of watching many waves battle the rip, the surf and it was fun...the announcer was great as he was up high and was commentating on the rip.  At first it was pulling hard South so start to the right, then it was pulling North so start to the left and then it was pulling out and it changed 3 or 4 more times.  Watching the numbers try and get out was fun. Bottom line run straight in and start diving and when the big ones come hold onto the sand (the wetsuit makes you pop right back up)

This is as good as it gets for a swimmer!  But I was so impressed by so many who embraced their fears and toed the line. They went for it and a lot of them make it out...and back in.   Some did not, but they tried it and were still able to do the Duathlon.   It was hard and scary. I got slammed hard coming in, full body tumble, goggles off, hit the sand....The adrenaline was high!

The most fun was the bike (an easy 10 miles) but I spent the whole ride looking for all my friends and with each one I would get a huge smile knowing they had made it.  It was all about relaxing, patience and not panicking.  And they did it!

The run was short and fast and I felt great.... the bike albeit short was just painful.  My legs are shot from CrossFit and lack of riding.  I have been running every day minimum 30 minutes and I can see how it pays off...I am used to running tired and sore and my legs know know how to respond. 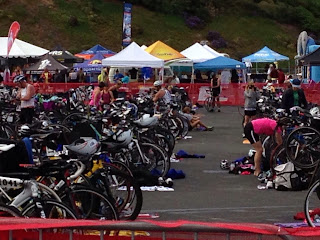 CrossFit and endurance training is NOT easy and most simply quit- as would I if I had a key race or racing season.  But I am committed to 3 days a week...that means my biking and running suffers.  I am experimenting with 3 days in a row and then hoping my legs will loosen up for the weekend for some longer rides but last week that did not work out so well due to being sick,  And I am traveling early this week- so will take in in stride.... what I want to see is if the CrossFit strength will pay off when it comes time to race... even though my running and riding is compromised. I have to increase volume or Vineman will not be doable and I will just have to keep it slow and see.  If it fails, it fails...but I will have tried it.   I absolutely love it- love the muscle confusion, the energy and the sheer physical abuse....