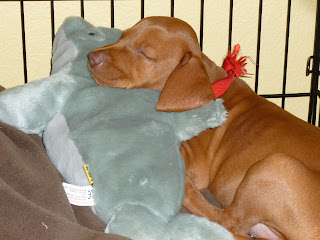 If any single guy out there is wondering how to kick up his social life..... get a puppy!   Any place I go with Mako I attract throngs of females.   No exaggerations.... girls flock to him and all go "ooooohhhhhhh"   and then ask if they can pet him, hold him etc.   It is quite amusing....

Before you rush out and get a puppy.....consider you will not sleep more than 3 hours at a time, you have to keep the house really clean (even though the puppy will trash it), you have to be home with him 100% of the time (at least for now), and he costs a lot of money....

Now for the pros's...he is by far the cutest pup ever (okay maybe we are a bit partial), he is smart- 7 days and he is nearly housebroken- no newspapers, no pads....just a lot of watching and as soon as he "looks like" he has to go we scoop him up and run him outside.  We did this about every 30 minutes....but it worked!   We have to keep the doors open- thankfully we live in SD and it is not winter yet, but we will have a dog door soon.   He is more fun than imaginable...snugly, wild, crazy, and in love with Zen. 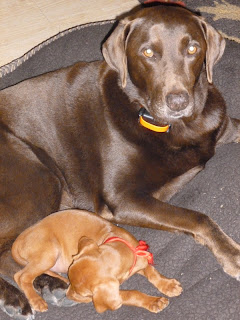 Here Zen is very tolerant....not always. Mako would love to curl up with Zen all the time but Zen is not too keen on that.    We have these giant pillow beds for Zen and well seems Mako has claimed them. 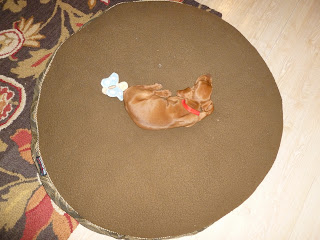 All Mako has to do it approach the bed and Zen runs away....so sad he is already the Alpha dog.   We are hoping as Zen gets bigger he will "appreciate" Mako and begin to have fun with him.  Time will tell.

In the meantime...trying to sleep, trying to work and trying not to play with Mako all day :)

Ironman- what's that....Oceanside is a long ways away. Pretty sure this off season thing is really going to stick this time.   Between lack of sleep and not being able to leave the house...makes it tough to do much!

Although..... I have ridden a few times with my girlies....good fun on the road bike and no gages.  Few early runs with Zen and 1 swim.  Not a total slug but close....and the diet (not as in trying to lose weight) but what I am consuming... probably too much beer and candy corns- but well I am making up for lost time!

Hate to make this a dog training blog,...but I am spending more time training Mako than I am me.  Next up- leash training, how to sit, better manners (flying leaps with stick in his mouth is cute now but not so much in a few months), better sleeping - although his bladder really needs to get bigger and start to learn to be left alone.  He is happy with his crate, as long as we are near by, it is not in the car and it is not dark (okay we have a ways to go on crate training) but that is where he will hang in the beginning when we leave- too many risks around the house- he nearly committed suicide playing with the iron, loves any and all cords, small anything (yummy)...we hope to avoid a $5000 vet surgery in the near future, well actually ever.