Day 1 in Mammoth was a good one....f'ing cold and windy, at least 1 million people, long lines but the snow was great and we had a good time. Skiing New Years week you have to have patience. Yes, this is the busiest week of the year. Yes, prices are inflated. Yes, there are lines for everything. Our first clue was the 50 person line at Subway in Lone Pine on the drive up. I swore I would never ski this week.....and then it dumped 11 feet last week, kids are out of school and well is it better to be skiing in expensive, crowded powder or sitting at home in the rain in San Diego?


Clearly we opted for choice 1. The luck of finding accommodations was good! We have a cozy one bedroom cabin at June lake which is awesome, 2 bedrooms would be more awesome but we are quite comfy and having a good time.

We were at the slopes by 8 and in line when the lifts opened at 8:30. We shook off the rust and enjoyed a few nice runs. Great snow and moderate wind. We dropped Riley at her lesson and JB, JD and I hit the mountain. Sensational snow and once we got off the bottom lift lines were not bad. Chair 9 rocked.....literally with major wind gusts but the snow as so nice and I love those runs. We worked our way to 22, another favorite and more good now but the wind was really howling. We were cold and grumpy. Our plan was ski until 1:20-2:00 and eat a late lunch. The lift lines eased up around noon as the other 900,000+ people were eating lunch. JD was freezing and went in around 1 and we joined him around 1:30 and poor kid had to eat outside in the gale. I bullied a spot near the fire, yes mama bear, and warmed him up. His goggles were leaking and letting in the frigid air. We worked our way back to Eagle and got new goggles from the car and did a few more runs. By this time there were 100's of people in each line as the top 1/2 of the mountain was closed. Mammoth is well mammoth in size and lift lines can be averted by skiing the tougher lifts but when they are closed it gets bad. We always rode single and made the best of it.

All in all....it was good! We called it a day at 3 and waited for rock star Riley who came into the lodge all smiles and had a sensational day with her new friends and 23 year old Swedish instructor. She was perplexed why we had called it quits- long lines, frigid wind and misery.... We had to laugh...I am sure the instructors go out for drinks and talk about the horrific day they had with pain in the ass people taking lessons. And when it was Sven's turn he was all smiles talking about is 5 teenage girls.

Typical post skiing evening....well not really as we kids had homework and then our nightly SAT vocabulary review with John and JD. John loves this and JD well tolerates is. Kills 2 birds...1 for the SAT and 2 for his Honors American Lit final with over 180 words. Soup, pasta and then movie time. Early to bed with anticipation of the storm brewing.

John woke first, before the alarm, with a holy shit there is a lot of snow.

Clearly we had some work to do before we hit the slopes.  John was up and dressed in no time and started shoveling. Soon he was friends with Bob ( the plow driver).  We had our walk cleared, chains on and windows de-iced (thanks to JD) beore any of our neighbors were up.

Gluten-free pancakes and hot coffee waiting and we fueled up and hit the road.  We decided to ski June Mtn today. 1- less wind. 2- less crowded and 3- promised fresh tracks for more of the day. We were of course there before the lifts open to find a long line of (mostly locals) eagerly awaiting the opening.  30 minutes late due to avalanche blasting (we were prepared for that) and up we went. June has 1 lift that takes you off the bottom to the base where the other lifts service the mtn. Only one other lift was open, others still blasting, and we headed up. Nice snow and some fresh tracks. I left John and the kids and hit some serious powder- thigh high on steep terrian.  There was a line forming for #7 to open but we we did not want to wait. We made 2 more lame runs and then as we got off the lift they took down the rope blocking off the back side. 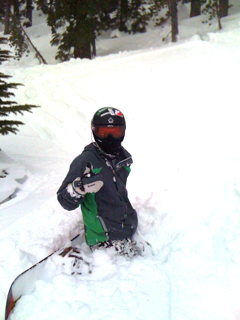 People we screaming, stampeding and hooting and hollerin as we all raced to #7. We were on the 10th chair and as we hit the run we saw 2 other tracks.  Knee to thigh high powder the entire run.  Riley wiped out and all I could see was her shoulders and helmet. I had to dig her out.  It was tremendous. We got in another run all fresh tracks and as epic as the first.  The next few were good by normal standards but waning in excitement. 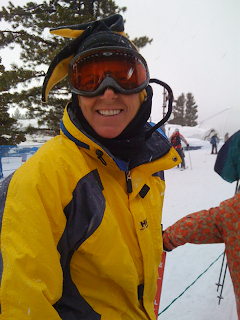 JD had a binding malfunction and Riley had one too many epic wipe outs so they headed in for some rest and equipment repair.  I snuck in 3 runs off the face and did myself in.  John rolling in along the way and I collapsed into a chair near the fire. Serously one of the best days ever.  Really it was only 12:30?
The afternoon was windy as the arctic storm blew in - that from weather.com. Temps plumeted and wind was so bad lifts began closing and it was not so fun anymore.   2:30 and we were freezing and dead tired.
Go big or go home was Riley's evening request....we went big!
﻿