So I head to Masters Swim Monday morning with the intention of swimming for an hour…bailing out mid way through the main set, because I can, it’s the off season. As I am walking in, 2 people say, turn back now…ugh I think breastroke week? No, it’s Monday distance day and after the warm up, Sickie announces “this work out is for Julie” Really? Oh yeah…its’ an Ironman kind of work out. How can I say no….so 5200 yards later I pull myself out of the pool and make the executive decision to skip the run. Starving…..I head to Starbucks (thanks to my Dad/K Birthday gift card) I am still enjoying Starbucks. And well with 5000 yards I earned a Scone….love the blueberry scones. Chilled, did a bit of work and then headed to the airport to pick up Johan…..24 hours later he made it back from South Africa. Glad to have my running partner back.

Back to school was tough for the kids….week off and it’s hard to get up and go back. Riley came home with a less than acceptable grade from before break and put the test on my desk with her cell phone- she knows the rules. No grades No phone. For a kids who sends 2000+ text messages a month this is like asking for her shoes. 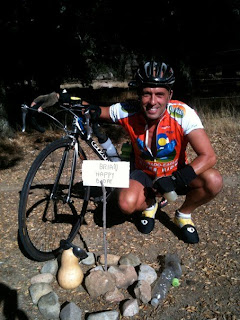 Tuesday was Brian’s birthday so we of course rode GWL. Rode from Sloan Canyon and Brian sent a pre- email that this was not going to be a hammer fest. Since he often sets the pace…well okay. So we backed off, chatted it up and had a big group. Riding counterclockwise, we are the beekeeper and about to head down the massive descent which does have one final climb- Brian calls it stinker hill. He announces that the ban on hammering does not apply to stinker hill….ugh that means uber hammer fest. He dropped us; E and I were drooling and almost falling off our bikes. JN was a total rock star out there, frickin 8 days post IM Arizona she is riding GWL. And we had double birthday treats- Rachel make the best, best cupcakes and if that was not enough Jen make double chocolate decadent cookies. Well 40 miles and 4500 ft earns you cupcakes and cookies without shame. 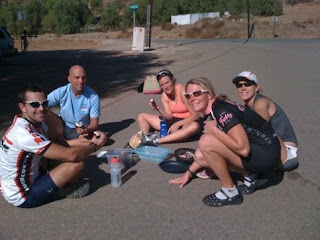 Wrapping up work, grocery shopping, laundry, cleaning the house….all had to happen Tuesday afternoon as I was heading out Wed AM for Puerto Rico. Got it done and even squeezed in a hair cut for Riley.

Woke up, wide awake 5:15 today….what??? Chilled for a bit and then decided well may as well get in a run before my cross country flight. Early run with Zen while Rocky was still in bed. He made it 30 minutes and started to lag so we went home to get Rocky for a short run. We head back out and Zen sits in protest at the end of the park – done running. No more for him. Rocky is only good for a short run/walk around the block and Zen sat in the same place the entire time. He was done. Dropped the boys off, fed them and ran a bit longer. Ankle is feeling good- thank goodness.

So travelling is always an experience….the good news is that the Wed after Thanksgiving is a pretty quiet day for travel. All the mayhem from the holiday is done and the Christmas travel has not started. Painless really….but I lost my boarding pass in DFW so I head to the gate and apologetically let the gate agent know. She lets out a sigh, rolls her eyes and then as if I am asking for a free first class ticket, she reprints my pass and slams it on the counter….customer always right? Hmmm no. So I always sit on the aisle and expect to get up for others but my peeve is when I get up go in the back, wait for 5 people, use the restroom and work my way back, sit down and as I am opening my book the guy on the window wants to get up. Come one….what about the 10 minutes the seat was empty???