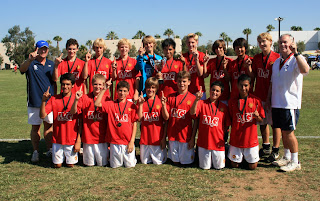 Great weekend of soccer. JD's team, CVMSC won their division in the Nott's Forest Tourament. A few well fought games and some digging deep led them to win. We love soccer, have great fun with the families so it is a good way to spend a few days. Even the 8am Championship Game was okay. Worked well for me., up at 6:00, quick run with the dogs and we are out the door by 6:30, at the field by 6:50 and I had time for an hour run while the team warmed up. Iced coffee in the car and settled in for the game. Boys were thrilled and celebrated the win at a team mates swimming and playing pool all day.

Riley was up and around by the time we got home and was soon off with a friend and I found time for a bike ride. Yes, it was about 75 and absolutely delightful. So, so nice to not be pouring sweat. Sunscreen yes and covered up but wonderful temperatures.

3 day weekends are so nice. The extra day just takes the pressure off. Working up toward a solid training week and a big, big weekend. Need to get some serious work done early in the week as we are riding most of Friday. And since, well it is already Monday, that leaves me 3 days- really better get working.

Had some fun yesterday with some new friends..... great couple with kids 10 years younger than ours....gee where did the time go. Had a nice dinner, enjoyed the cooler weather and the kids loved the pool. JD and a buddy wanted to build a bridge over the pool to have a sword (noodle) fight upon. Well they asked Braman and he said, go for it (gotta love that about JB) So out came the tape measure, wood, nails, drill, saw.....and they worked and worked and dragged it to the back and John made some engineering improvements and they were ready to go. The group was eager with anticipation to see if the bridge would hold. They dragged it across and tentatively climbed on it. It actually held 2 teenage boys, bowed in the middle but they had their sword fight and fought until one plunged into the pool. This was repeated many times and some of the younger kids gave it a try until it bowed so much it touched the water. Never broke but it soggy... Great fun was had by all the boys, big and small, in the building and playing. Love to see the imagination come out and to fruition. He may be 15 but still likes a good sword fight :)